This review is written with a GPL 4.0 license and the rights contained therein shall supersede all TOS by any and all websites in regards to copying and sharing without proper authorization and permissions. Crossposted at WordPress, Blogspot & Librarything by Bookstooge’s Exalted Permission
Title: Two Noble Kinsmen
Series: ———-
Author: William Shakespeare
Rating: 1.5 of 5 Stars
Genre: Play, Tragic Comedy?
Pages: 246
Words: 71K

A prologue informs the audience that the play is based on a story from Chaucer.

Three queens come to plead with Theseus and Hippolyta, rulers of Athens, to avenge the deaths of their husbands by the hand of the tyrant Creon of Thebes. Creon has killed the three kings and refuses to allow them proper burial. Theseus agrees to wage war on Creon.

In Thebes, Palamon and Arcite, cousins and close friends, are bound by duty to fight for Creon, though they are appalled by his tyranny. In a hard-fought battle Palamon and Arcite enact prodigies of courage, but the Thebans are defeated by Theseus. Palamon and Arcite are imprisoned, but philosophically resign themselves to their fate. Their stoicism is instantly destroyed when from their prison window they see Princess Emilia, Hippolyta’s sister. Both fall in love with her, and their friendship turns to bitter rivalry. Arcite is released after a relative intercedes on his behalf. He is banished from Athens, but he disguises himself, wins a local wrestling match, and is appointed as Emilia’s bodyguard.

Meanwhile, the jailer’s daughter has fallen in love with Palamon and helps him escape. She follows him, but he ignores her: still obsessed with Emilia. He lives in the forest half-starved, where he meets Arcite. The two argue, but Arcite offers to bring Palamon food, drink and armaments so that they can meet in an equal fight over Emilia.

The jailer’s daughter, forsaken, has gone mad. She sings and babbles in the forest. She meets a troupe of local countrymen who want to perform a Morris dance before the king and queen. Local schoolmaster Gerald invites the mad daughter to join the performance. Theseus and Hippolyta appear, hunting. Gerald hails them, and they agree to watch the yokels perform a bizarre act for them, with the jailer’s mad daughter dancing. The royal couple reward them.

Arcite returns with the food and weapons. After a convivial dinner with reminiscences, the two fight. Theseus and his entourage arrive on the scene. He orders that Palamon and Arcite be arrested and executed. Hippolyta and Emilia intervene, and so Theseus agrees to a public tournament between the two for Emilia’s hand. Each warrior will be allowed three companions to assist them. The loser and his companion knights will be executed.

The jailer finds his daughter with the help of friends. He tries to restore her mental health. On the advice of a doctor, he encourages her former suitor to pretend to be Palamon so that she will be gradually accustomed to see him as her true love. His devotion slowly wins her over.

Before the tournament, Arcite prays to Mars that he win the battle; Palamon prays to Venus that he marry Emilia; Emilia prays to Diana that she be wed to the one who loves her best. Each prayer is granted: Arcite wins the combat, but is then thrown from his horse and dies, leaving Palamon to wed Emilia.

I did not enjoy this at all.

For one thing, there wasn’t any comedy. I can see where you could mine comedic gold from 2 cousins fighting over the princess of the country they were just fighting against, but this was all serious business.

Secondly, reading Shakespeare can be hard enough, but this time around he used what is I’m guessing his equivalent of “old timey language” to make it appear as if this was some old story. There were times I simply could not comprehend what was being said or what was trying to be conveyed.

Thirdly, in conjunction with that, the plot was almost opaque to me. It wasn’t until I read the Wiki synopsis that I felt like I had a grasp of what I had actually read.

Really felt like I wasted my time and I simply tried to get through this as fast as possible to get it over with. That is NOT how I like to read my books nor do I recommend it to anyone. Poop.

Last month (or so) Ola and Pio from Re-Enchantment of the World, did a Nostalgia post on Star Wars.  If you haven’t read it and have any love of Star Wars, I highly recommend their post, it was fantastic! It also reminded me that I had been a big fan of Star Wars for a very long time.

I know that now whenever Star Wars is now mentioned I’m pretty negative about it. I don’t keep that a secret, whether it is about the books or new movies. But it wasn’t always that way.

I was born in the late 70’s and by the time Return of the Jedi had come out I was aware enough of Star Wars to know how awesome it was. Of course, that was mainly because a neighbor boy had almost all the toys.  But I became very well versed in the Star Wars lore based on those toys.  As time passed I watched the movies from the library, on vhs.  You might say I was as much a naive farm boy was Luke ever was.

When the Special Edition vhs editions came out in ’97, I bought them and me and my siblings and some friends had a Star Wars party. I don’t remember what everyone dressed up as, but it was cool. We were pretty cool in fact and we loved Star Wars. Even now, when I don’t have a vhs player or anyway to watch these, I’m not giving them away. They have Memory Value to me, big time.

After that, I began to devour the Star Wars Extended Universe books. The Thrawn Trilogy was my gateway, like for so many other people and it just went on from there. The EU was really expanding and a new Star Wars book would come out every couple of months it seemed like. Even with the bad ones I felt like I was swimming in gravy. When you’re 19, a year is a long time and anything from a niche cult classic was good.

I bought, played and beat the Dark Forces II: Jedi Knight video game on both Light and Dark paths. 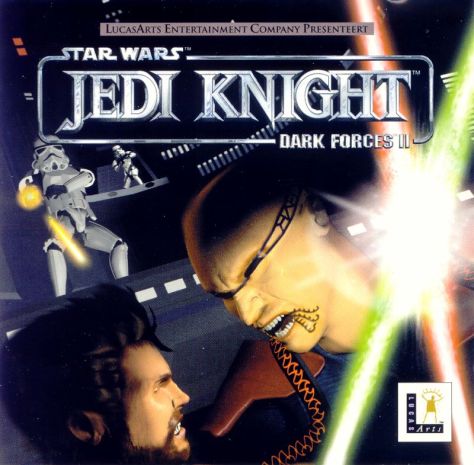 I bought the boxset of the audio tracks for the original trilogy too.

Then the prequels came out. I can remember how EXCITED I was for Episode One.  I remember hearing someone say they didn’t think it was that great and I distinctly know the word “blasphemy” sped across my mind. I was convinced it was going to be so great.  On one of our field trips I saw the book in a bookshop and spent some of my very precious cash on it. I sat in the van the rest of the afternoon reading it instead of going on tours and seeing the Washington Monument and other such useless things. Star Wars was more important. Then I watched it with a group of guys at Bibleschool.  I enjoyed it immensely but deep down inside I realized exactly what that person who spoke blasphemy meant. It was not “Great” with a capital “G”.

But it didn’t matter because more and more books were coming out. Prequel books, Clone War era books, then the massive 21 books series collectively known as the New Jedi Order.  More and more and more books. The rest of the prequel movies came out as well and that was when everyone realized Lucas wasn’t the genius behind the original trilogy. We got lucky he didn’t direct them. But I still loved Star Wars.

**STRONG AND PROFANE LANGUAGE. I APOLOGIZE AHEAD OF TIME**

Sadly, the prequels were the first small step onto my journey towards becoming a Non-Fan. When Lucas released the original trilogy on dvd for the first time, he fucked every fan in the ass with no lube, laughed at us and told us to shut the fuck up and ask for more. If you don’t know what I’m talking about, please feel free to ask in the comments.

But the books kept on rolling out. The EU was growing. New characters were trying to emerge. Then the next big hit came. In 2014 the EU was declared Non-Canon. It was unceremoniously chucked out the window to make room for Disney, which Lucas had sold Star Wars to. Star Wars was now a common franchise whore. No longer a precious jewel to be cherished by her fans but a wildly successful money maker. George Lucas knew no shame and Disney never had any.

My hope, while just an ember, was still producing heat. The Force Awakens would surely redeem all these business decisions, right? Then I watched the movie and my final flame of hope flickered out.  Star Wars was now nothing but grey ash that greedy bullies had pissed all over.  A literal lifetime of fandom was dead. The only lesson I learned was to never become too invested in something you don’t control, because some jerk will eventually destroy it. Thus my Journey from Farmboy Jones to Darth Bookstooge was completed. (Man, I’m depressing myself here. Sorry about that.)

There is no happy ending for me here. The best I can do is to try to not rain on other peoples’ blogs when they go on about new Star Wars books and even then I know I’m not successful. See, I told you this was a tragedy worthy of Shakespeare.

My apologies for dragging Ola and Pio’s wonderfully upbeat post into such a sad one.