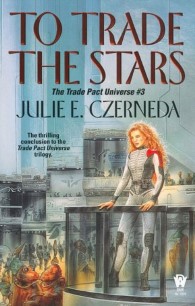 This review is written with a GPL 4.0 license and the rights contained therein shall supersede all TOS by any and all websites in regards to copying and sharing without proper authorization and permissions. Crossposted at WordPress, Blogspot & Librarything by Bookstooge’s Exalted Permission
Title: To Trade the Stars
Series: Trade Pact #3
Author: Julie Czerneda
Rating: 1 of 5 Stars
Genre: SF
Pages: DNF @ 1%
Format: Digital Edition

“…leaving me cold along one side until I snuggled under the portion of sheet warmed by his body.”

This is not SF. This is now a woman’s romance novel with spaceships. I don’t want to read crap like this, thank you very much.

What a frelling let down, especially considering how much I enjoyed the first book. But this is exactly why I tend to stay away from women writers. They’re always dragging in stuff like that that has zero interest to me. They are more than welcome to write it but don’t fracking expect me to read it or to put up with it when I do make the mistake of stumbling across it.

This review is written with a GPL 4.0 license and the rights contained therein shall supersede all TOS by any and all websites in regards to copying and sharing without proper authorization and permissions. Crossposted at WordPress, Blogspot & Librarything by Bookstooge’s Exalted Permission
Title: Ties of Power
Series: Trade Pact #2
Author: Julie Czerneda
Rating: 3 of 5 Stars
Genre: SF
Pages: 499
Format: Digital Edition

Sira and Jason Morgan are living safe from the Clan. Jason has been growing in power under Sira’s tutelage. Things start to go sideways though when Sira’s cousin, now also exiled, shows up on their doorstep. It would appear that there is another splinter group of the Clan opposed to the Council but who want Jason just as dead and Sira under their control. The Council itself hasn’t stopped playing games either.

This leads to Sira being abducted and her reproductive organs stolen. Morgan rescues her and then she compels him to go after those who did this to her. Meanwhile, she gets sidetracked into attending a ceremony on an alien world where the aliens apparently know about the M’hir, the energy space the Clan uses. Sira learns that the M’hir is a whole other ecosystem and not some creation of the Clan.

Kidnappings, murders and mystery abound. Everyone comes together and Sira deals with those who have crossed her. Her own father tries to murder Morgan in an attempt to kill her but thanks to Sira’s training Morgan not only survives but fights back. This allows Sira, as the most powerful of the Clan, to wipe her father from existence.

The Clan is invited into the Trade Pact and the Council has voted to join. Cooperation, good cheer and hope are everywhere. And Sira has her naughty bits back so she and Morgan can consummate their Joining.

Yeah, not nearly so enthralling as the first book. Way, way, way further down the romance road.

Most of my problem stemmed from the fact that if Jason and Sira had taken a straight line from point A to point B, they could have solved their problems with power and force and violence. Instead, because of “feelingz”, they continually get hurt and so can’t fully use their power together. This leads to an elliptical storyline where they keep going in circles while edging extremely slowly to that mythical point B.

A bloody ship with some big guns and a fully healthy Sira with her powers could have wiped her father and co-conspirators from the face of the universe in about 1 month. But my goodness, where would the “feelingz” be then? There would have been at least half the collateral damage if Jason Morgan had been a bloody man and just killed the people who were threatening him and his wife. Running away and wishing that things will get better don’t solve problems.

This crossed the line from the kind of romance that I do like into the kind that I really don’t like.

Up until the very end, Sira just gets hammered and reacts, every single time. It frustrated me because I could see how easy it would have been for the Morgan’s to have planned differently and have everything turn out better. The story was interesting and everything we learn is cool but it came at the cost of Jason Morgan acting like a pussy and Sira a fainting maid instead of the extremely powerful and talented powerhouses they are.

Czerneda is now on probation and depending on how the next book turns out will decide if I continue with her or not. 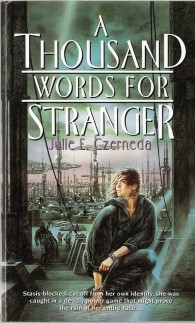 This review is written with a GPL 4.0 license and the rights contained therein shall supersede all TOS by any and all websites in regards to copying and sharing without proper authorization and permissions. Crossposted at WordPress, Blogspot & Librarything by Bookstooge’s Exalted Permission
Title: A Thousand Words for Stranger
Series: Trade Pact #1, Clan Chronicles #4
Author: Julie Czerneda
Rating: 4 of 5 Stars
Genre: SF
Pages: 464
Format: Digital Edition

A young woman comes to consciousness without her memory but with something inside insisting she get to the spaceport and get off whatever world she is on. After several mishaps, kidnapping by slavers being one, she gets on board Jason Morgan’s ship and signs on as a crew. Without her memory, Jason chooses the name Sira Morgan for her.

What Sira doesn’t know is that The Clan, a race of humanoids with telepathic powers, has contacted and contracted Jason to bring Sira to a particular destination. Morgan has had dealings with the Clan before and even though fully human has some small telepathic power himself. Due to his previous dealings, Morgan doesn’t feel it is safe to deliver Sira to anyone, so he keeps an eye on her and reveals what little he knows to Sira.

Sira is captured by a rogue Clan member who wants to marry her, mind wipe her and then impregnate her so his offspring will have her ultrapowerful Clan power. Morgan rescues her and brings Sira’s sister and guardian into the picture. They deliver Sira to the Clan Elders and Sira’s father reveals that everything was all according to Sira’s own plan and that Sira Morgan will die when Sira di Sarc regains her memory. Sira Morgan has fallen in love with Jason and he with her. He comes up with a plan to rescue her but Sira recovers her memories and realizes everything, even her own plans, were a ruse by her father to brainwipe her and use her like an auction piece to gain power for his own House.

Somehow Sira and Morgan escape without alerting any of the Clan that Sira has recovered her memory but not reverted back to Sira di Sarc. She and Morgan are now on the run and just one mis-step away from disaster and annihilation.

For some time I was on a real kick with the Liaden Universe books by Sharon Lee and Steve Miller. I had to stop reading them due to some of the moral content but I enjoyed them as they scratched that Jane Austen in Space itch that I had but didn’t know I had until I read those books. This book had that exact same vibe. So much so that I went and did a little investigating, thinking that maybe Czerneda had got the idea from the other duo. Turns out this book came out the year BEFORE any of the Liaden books came out (as far as I can tell).

So to set the stage, this IS a romance book. However, unlike that horrible, horrible woman Lindsay Buroker, this is definitely more Austinesque in the romance. It is NOT about beating hearts, or smoldering glances, or tight pants or revealing of various body parts. Nor is it like a Janette Oak book that is nothing but feelings dumped like a hogshead of maple syrup all over the reader. In other words, this is romance that I, the manliest man I happen to know, like. Considering that someone once asked me if it was true that I beat Chuck Norris at Arm Wrestling, I think I’m pretty bleeping manly!

There were times I was a bit frustrated with Sira’s memory loss and how she reacted but that was strictly because I had more information than she did. It’s always easier to tell somebody what to do when you have more information than them. The other thing that left me a bit confuzzled was just WHAT the Clan actually is. It is never spelled out and little hints are given here and there about their history. Knowing, or not, doesn’t affect the story as far as I can tell, just one of those things that I as a reader “want”.

When I started this I was not sure what I was going to get. Thankfully, the book and I hit it off right from the start and I enjoyed my time reading this. Looking forward to the rest of the trilogy. There is a prequel trilogy, the Clan Chronicles but since they were published AFTER this Trade Pact trilogy I plan on reading everything in publication order.

So remember, Telepathic Jane Austen, In Space and you should be good to go!

Reviews made by a fan of movies, books, TV - all things that tell a story