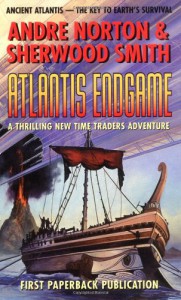 The following quote from the book epitomizes why I abandoned this piece of betraying filth.

“Ross took her face in his hands so he could gaze down into those lovely brown eyes flecked with tiny bits of gold. I could swim in those eyes, he thought…”

The first 4 Time Trader books, by Norton alone, were wonderfully fun adventure stories. These previous 3 books were romance stories that hijacked the characters I had come to like and turned them into romantic caricatures of themselves. The Ross Murdoch of the Time Traders I liked would NEVER utter or think such things as the above. He was a man on a mission.

The Time Traders were betrayed by these collaborations and I for one am sick because of it. These last 3 books have now tainted the first four books for me. Good job Smith, you Chamberlain; Hitler would be proud.

Ross, his new bride Eveleen and a bunch of other Time Agents, both American and Russian, head to the world where they originally found the Baldie chrome ship.

A russian group of time agents have already been dispatched and have disappeared so Ross and Co must solve that mystery and figure out if it is some Baldie plot to destroy humanity.

The previous TT book I disliked because it was a romance, plain and simple. This was worse, in many ways, because it was all about feelings and self-introspection and solving deepseated issues. I can like those kinds of books, but Time Traders was about raw, powerful men getting a raw deal and then fixing it. Preferably with large amounts of violence of one sort or another while at the same time using their brains to keep things under control.

I feel that I was riding a Harley motorcycle for the first four books and then suddenly, when I stopped for gas, someone switched it out with a pink vespa. You don’t change vehicles mid-ride. It is one thing to restart a series, but to change the tone this drastically, well, you might have done better to start a new series altogether because you sure lost this fan.

There is one more TT book and I plan on reading it but as far as I’m concerned, there are only 4 Time Traders books.

Ross Murdock and Co head to a world that in the future opposes the Big Brains and win. The Big Brains burn the world in the past and Ross must prevent that from happening, all the while hiding Earth’s involvement.

And he gets involved with some chick.

This was a disappointment. Who ever P.M. Griffin is, this collaboration did not work for me, at all.

This was a bloody romance. I don’t have a problem with those, but I do when it is completely different from the previous FOUR books in the series. I enjoyed this as a standalone story, but not as a part of the Time Traders.

I don’t know if I want to read any more. I believe the rest of the Time Traders are collaborations as well and this one just turned me right off.

The Defiant Agents
Key Out of Time
Time Traders #2
by Andre Norton
Ebook, 384 Pages
My rating: 3 of 5 stars

First story bordered on the “ignorant rascism” for me, but maybe that is because I’m a product of the times and am overly sensitive [I suspect that is true].

Second story was more in the vein of the Time Traders I was used to. Enjoyed it very much.

A book with 3 separate short stories all tied together by common characters. Basically, humanity finds the ability to time travel and the Americans are going through history trying to find the Russians, who seem to have found some advanced tech way in the past. Turns out it was from an alien spaceship. The russians get all their bases destroyed and the americans start tiptoeing.

Ends with a group of americans finding an intact spaceship and making a trip to the aliens world. The alien empire seems to have fallen and humanity looks to have a free hand.

I really enjoyed this. Norton writes in the classic scifi style and it was nice to have some straight forward adventure stories without all the psychological baggage.

Join 411 other followers
Follow Bookstooge's Reviews on the Road on WordPress.com