This review is written with a GPL 4.0 license and the rights contained therein shall supersede all TOS by any and all websites in regards to copying and sharing without proper authorization and permissions. Crossposted at WordPress, Blogspot, & Librarything by Bookstooge’s Exalted Permission

Big Ben and the End of the Pier Show – James Lovegrove

Day of the Demigods – Peter Stenson

One Last Round – Nathan Black

Of the Earth, of the Sky, of the Sea – Patrick M. Tracy and Paul Genesse

The Flight of the Red Monsters – Bonnie Jo Stufflebeam

The Banner of the Bent Cross – Peter Clines

The Turn of the Card – James Swallow

I picked up this collection on the strength of Correia’s name being prominent on the cover I saw. Unfortunately, for me, it was a story he had included in his first Target Rich Environment collection, so I had already read it.

Josh Reynold’s story was about the Royal Occultist, so that was a nice little visit and reinforced my decision to read more in that universe should Reynold ever be able to release more.

Sadly, those 2 were really the only bright spots. Most of the other stories were either Cli-Fi, Angst-ridden or so full of hatred for Humanity that I had to wonder why the authors hadn’t killed themselves in protest of being human. So this was definitely on the path to 2stars. Some of the stories had Buddhist monks, Japanese nuns, Islamic warriors and one and all, they respected the environment, respected women and were paragons of virtue, which I have to admit, didn’t even fly across my radar in any way.

Then I read stories like “Conversion” and “Fall of Babylon” and this completely entered into Blasphemy territory. They didn’t make me angry or upset, I just sighed and shook my head. It was evident that the authors despised Christianity, not just didn’t believe it and that showed through like a drop of blood on a white canvas.

So between the religious hypocrisy and the blasphemy, this is getting the rare ½ star. Last time that happened was with Torchship Captain. Not good company to be in.

As I was writing this review, I realized that the editor’s name sounded familiar. If I had paid more attention and realized Tim Marquitz was involved with this project, I never would have touched this with a 10foot pole. Certainly explains the blasphemy and religious hypocrisy. 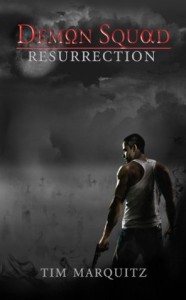 Trig gets tricked, manipulated and whatnot into stopping a necromancer from raising Longinus, the soldier who stabbed Christ’s side. Only Longinus was a demon, so he got a butt load of power from that act. If he comes back, he’ll be top dog.

The first book was crass. I figured Marquitz was just seeing how this whole writing gig worked. This time around, his writing was just as crass, if not more and it is very apparent that this is a style choice by the author. So if you like your 500 year old half demon commenting on every pair of breasts and butt that he sees, running commentary on the state of his genitals at any given moment, and unrestrained lewdness and lustfulness, then this book is for you.

If, however, you have even an ounce of taste, restraint or class, this book will either secretly titillate you or disgust you. Considering the juvenile tone of everything, I’m betting on disgust.

The only positive is that now I can clear this series off my kindle and make room for another. That is damning praise indeed.

Frank Trigg, nephew of the devil, once candidate for the Anti-Christ, is now living in a post-God/Devil world. Only the demons and angels are left. Some of them want the status quo, some want to become Top Dog and some want the Cessation of All, ie, Armageddon.

Trig was born 500 years ago. No details are given, which is pretty par for this book. Things are just “told”.  He has a cousin, who is an angel. Who he has redneck desires for. An ex-wife who is a succubus, who betrays him at every turn.

Add in the ridiculous ideas about God and the devil, which mostly consisted of the fact that both God and the devil got sick of humanity, so they walked off into the void, or non-existence and you have the depths of this book.

The action was like the old video game Doom. Trig runs around like a chicken with his head cut off and shoots things and gets shot and pretty much chewed up. Then he gets a “power up” and gets healed, just in time for it all to happen again.  A fun ride if you don’t mind be immersed in a 23 year old males mind.

From a purely technical standpoint, this was indie all the way. It was the story Marquitz wanted to tell but it lacked depth, skilled writing, polish and that indefinable something that all good books have. I’m planning on reading the next one just to see if his writing improves; if not, then this is one to avoid.