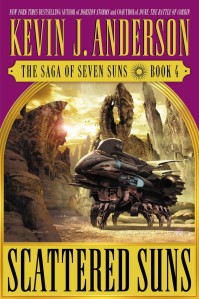 Series: Saga of the Seven Suns #4

I am done with Anderson. Nothing in the first chapters of this book drew me on and given the track records of the previous 3 books, I thought it best to simply Abandon this book, this series and Anderson as an author.

Wanted to clear out my Currently Reading list and get all the reviews out of the way before the New Years.  Not a review really, but everything by Anderson just bores me.

Series: Saga of the Seven Suns #3

Surprisingly little happens in this volume.

The Roamers make an alliance with the Wentals [water elementals] and with the Free Planet of the Green Priests. They also find out that the main Human Empire has been pirating their space fuel and so cut them off, which brings reprisals.

The klikiss robots advance their plans to wipe out humanity and the ildarans.

The hydrogues and the faeros are duking it out and continue to destroy worlds and suns in the process.

Thankfully, this book didn’t drag like the last one. However, not nearly as much happened. Got to the end of the book and went “huh? that is it” but not in a good way.

I consider books like this to be like eating frozen pizzas. They satisfy your hunger, don’t disgust you and do what they are supposed to, but you’ll never pull out the candles, the good china and silver and hire your neighbor to act as a waiter so you and the Mrs can eat a “le’ frozen pizza”.

Anderson is a b list author who has made a name for himself but I don’t consider him to be a “good” author, merely a competent writer. His storylines leave a lot to be desired as do his characters and general blaseness.

I’ll keep reading stuff by him and I’ll probably lambast it each time as well. Hopefully that will help you if ever decide to read something by him.

Title: A Forest of Stars

Series: Saga of the Seven Suns #2

Stuff happens and the other ancient alien races appear. One for each element of Air, Water, Fire and Earth.

This definitely deserves the title of “Saga”, as it is huge in scope.

Most of my experience with Anderson has been with his Star Wars books and they never impressed me, not at all. This series, the writing is almost like he is enjoying what he is writing and he’s trying to do a good job. And it shows.

My only problem is/was that this was just too big. Too much is happening and to force it all in, you get some really boring stretches. Overall, a solid read but not something I’ll ever re-read or salivate for the next book, unlike Akira. 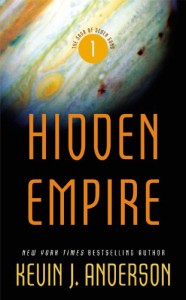 Humanity, allied with an ancient alien race, is spreading out to the stars. Quickly and voraciously.

A much older alien race, which has disappeared, has left behind its civilization, offering tantalizing clues to instantaneous travel and the like.

Humanity uses one of these new tools to create a sun out of a gas giant and in the process discovers another alien race. These new aliens are immeasurably powerful, so much so that they are the ones that completely destroyed the disappeared aliens.

I’ve never been a big fan of Anderson, as I have found him to be a mediocre writer, especially in the Star Wars Expanded Universe.  But I wanted to give him a shot on his own writings, so I figured I’d try this series.

This was chunked up into about 15-20 viewpoints and at first I was worried I was going to have just little snippets from each. But characters die, side characters move up and it is a revolving wheel.

This is a sprawling Saga indeed. Human factions, alien factions [allies, dead and enemies] and robots from the disappeared aliens. It is going to be a fight for survival for humanity for sure.

Overall I enjoyed this book and beginning of the series. Anderson’s writing, while not wonderful, was not the juvenile tripe I was mentally preparing myself for.  Hoping the rest of the series bears this beginning out.

Saga of the Seven Suns #1

Join 413 other followers
Follow Bookstooge's Reviews on the Road on WordPress.com