This review is written with a GPL 4.0 license and the rights contained therein shall supersede all TOS by any and all websites in regards to copying and sharing without proper authorization and permissions. Crossposted at WordPress, Blogspot & Librarything by Bookstooge’s Exalted Permission
Title: The Wrecking Crew
Series: Matt Helm #2
Author: Donald Hamilton
Rating: 1.5 of 5 Stars
Genre: Action/Adventure
Pages: 272
Format: Digital Edition

Matt Helm is back working as part of the Wrecking Crew, that shadowy blacker than black government organization that carries out assassinations against targets around the world who are enemies of the United States.

Helm’s wife served him separation papers after finding out about his secret past during World War II and with nothing else to occupy him, Matt returns to the only thing he really knows. This time he is sent after a shadowing agent working for Russia that took out a valuable double agent for the United States. Hooking up with the dead man’s wife, Helm uses her to find his way to the Mastermind. With lots of twists and turns (who is working for who, are the good guys actually the good guys?), Helm bulls through it all in Norway. Using women like sanitizer soap, Helm eventually gets his man.

The book ends with his wife sending him signed divorce papers and a note that she and the boys are now with another man, a “good” man.

I liked the story. The twisty turny Cold War aspect was great. It was fun, it was thrilling and it kept the suspense up right until the end when Matt shoots the Mastermind.

Sadly, that just wasn’t enough. Helm’s sleeping with multiple women while still married is not something that I want to give countenance too. Someone as controlled as Helm CAN control himself in the area of sex. He simply chooses not to and I consider that a fatal flaw in a book character.

Throw in that he’s pretty “Awww, whatever” about his wife leaving him and the fate of his 3 children and he just sickened me. When he found out they were all with another man they liked, he was like “Oh good, now I don’t have to worry”.

Very disappointed with how this turned out. Matt Helm is no hero and characters like him, with an empty moral framework, do more to destroy this country than any hardline communist ever could. So I’m done with this series and will be moving on. 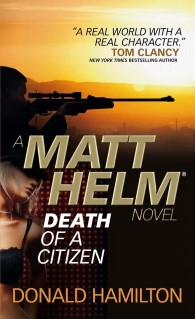 This review is written with a GPL 4.0 license and the rights contained therein shall supersede all TOS by any and all websites in regards to copying and sharing without proper authorization and permissions. Crossposted at WordPress, Blogspot & Librarything by Bookstooge’s Exalted Permission
Title: Death of a Citizen
Series: Matt Helm #1
Author: Donald Hamilton
Rating: 3 of 5 Stars
Genre: Action/Adventure
Pages: 240
Format: Digital Edition

Matt Helm is now an author, married to the woman he loves with 2 children. What he used to be in World War II was a special forces assassin who took out ancillary targets to weaken the Axis war machine. But that is in the past.

Until the woman he used to love comes back into his life and gives him the signal that he’s been reactivated. The target? Communists who are targeting our own scientists so as to destroy the United State’s technological edge.

Things don’t quite add up though and part way through, it is revealed that Slinky Seductress turned long ago and has been using Matt against the United States. Now, with his baby daughter kidnapped, Matt must save a nuclear scientist’s life, rescue his daughter, prove he’s not a communist to his old Section Chief and capture or kill all those who put him in this situation.

I thoroughly enjoyed this with just a few caveats, so let’s get them out of the way.

This was written in the 1960’s about the 1960’s. So the attitudes and cultural norms are going to be quite different from 2020 (yeah, yeah, I know it’s 2019, but close enough). That didn’t bother me but I suspect it will for the kind of reader that infests devilreads these days. So don’t be surprised.

Second, and what did bother me, was how casually Matt Helm treated his wedding vows. He’s on the run with Slinky Seductress (henceforth known as Slinky) and within a day has slept with her. I think the author writes something like:

“and since I knew I was going to sleep with her, I figured I’d better get it over with so I could deal with the guilt so it wouldn’t affect me later”.

And then his attitude is that his wife will take him back anyway because she loves him. Ugh. And that is why I knocked off 2 stars.

On to the good stuff.

Matt Helm is a man’s man and whether it is with gun, car or fists, he’s good. Not necessarily the best, but pretty close even after 15 years of retirement. He’s pragmatic to the point of dishonor but he just doesn’t care. He’s a throwing knife that once thrown, goes straight to the target.

As much as I’m an introspective kind of guy, it is refreshing to read about a man who just does what needs to be done, period. At one point he kidnaps the man who had kidnapped his baby daughter. The kidnapper thinks he has the power since he knows where the girl is and Matt doesn’t. Does Matt agonize and moan and beg? No, he shoots the bastard in the gut and stands over him while he takes hours to die, agonizingly. Now THAT is justice for a kidnapper of babies.

I like how this book’s title really gives away the ending. Matt Helm can’t remain just a citizen after what happens. But how does he reconcile that with his family life? We don’t get that answer in this book. Probably in the next one or two. But we do know that Matt Helm, author, is dead and that Matt Helm, special forces assassin, is back. I am looking forward to more of his adventures and to how the author will deal with the twin dynamics of Country and Family.

Join 413 other followers
Follow Bookstooge's Reviews on the Road on WordPress.com