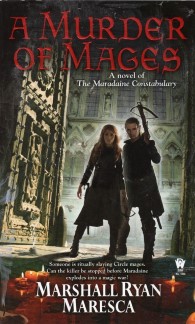 This review is written with a GPL 4.0 license and the rights contained therein shall supersede all TOS by any and all websites in regards to copying and sharing without proper authorization and permissions. Crossposted at WordPress, Blogspot & Librarything by Bookstooge’s Exalted Permission
Title: A Murder of Mages
Series: Maradaine Constabulary #1
Author: Marshall Maresca
Rating: 3 of 5 Stars
Genre: YA Fantasy
Pages: 341
Format: Digital Edition

Satrine Rainey, former Intelligence Officer, wife of a former Maradaine Constable and mother of two, must forge her way into the Constabulary as an Inspector Third Class so as to provide for her family. Her husband, hurt on duty, is now a human vegetable and his superiors have hung him out to dry, financially speaking. Satrine successfully gets the job. She is paired up with Minox Welling, an uncircled mage who uses rather unorthodox investigative methods. Minox’s nickname is Jinx, as he has already lost 3 partners.

They begin by investigating the murder of a mage who had his heart cut out. More murders follow, apparently without much rhyme or reason beyond them being of mages. At the same time Satrine has to worry about her deception being found out and kicked off the force.

Her deception is found out when her daughter gets involved with a college student and Satrine puts a very public stop to the relationship. The boy retaliates by telling his daddy who knows the Commisioner, whose seal Satrine forged to get her the job. It all comes crashing down and she is off the force and having to seriously think about being a prostitute to support her family.

Then she figures out what is going with the murders, discovers that her former partner is next on the list and sets out to rescue him even while not officially being on the force. She has the help of 2 other Constables and ends up saving Minox, getting reinstated in the Constabulary and bringing the murderer to justice.

There is another storyline involving Minox and another uncircled mage, but it is very much setup for future books and doesn’t impact this one very much.

After my mis-adventure with the stupidity of the first Maradaine book, I came into this with extremely low expectations. It is a good thing I did.

Thankfully, none of the characters were complete idiots like the guy in the other book. However, everything, from characterers to plot to motivations, were still very simplistic. There are times I want a simple book, especially after reading one of the Malazan tomes, but there is a difference between simple and simplistic.

I was not impressed with this book at all, but I also didn’t feel like throwing it out the window. That’s about the only praise you’ll get out of me for this. I’m done with Maresca and will leave him to those who enjoy his writing. I am not one of those people.

This review is written with a GPL 4.0 license and the rights contained therein shall supersede all TOS by any and all websites in regards to copying and sharing without proper authorization and permissions. Crossposted at WordPress, Blogspot & Librarything by Bookstooge’s Exalted Permission
Title: The Thorn of Dentonhill
Series: Maradaine #1
Author: Marshall Maresca
Rating: 2 of 5 Stars
Genre: YA/Fantasy
Pages: 400
Format: Digital Edition

Veranix Calbert is the son of a former gang leader. His father fled the city but when it was discovered that “Veranix” had magical talent, the family returned for just a couple of days to drop the boy off at an academy under his now assumed name. Another gang leader, Willem Fenmere, used those days to kill the father and brain burn the mother with an illegal drug.

Now a young mage, Veranix spends his nights taking out two bit hoods who sell the drug and giving any of their money to local charities. By day he has to be a student full time. In the process of spoiling what he thinks is a huge drug deal, Veranix comes into possession of a magical cape and rope. Using these items, his war against Fenmere escalates, to the point where Fenmere hires professional assassins to kill The Thorn.

It leads to his professor and a young woman who has been helping him all along being kidnapped by some mages who hired Fenmere to import the cape and rope. With the help of his friend and a cousin in a gang and some just plain dumb luck, Veranix rescues everybody, keeps his identity a secret and prevents one of the bad mages from gaining some super serious magic stuff.

Then its back to school and business as usual.

I went into this book, and series, with a really bad attitude towards the author. He’s currently writing 3!!!!! Maradaine related series, which wasn’t real bad, but I’d prefer he writes one series then the next. But what crossed the line was when he intersected two of the series, making it imperative to have read book 1 and 2 of one series and book 1 or 2 of the second series to understand the 3rd book in series one. That pissed me off. So that was my starting point.

I had heard lots of good things though, so I figured I needed to give this guy a chance.

Right off the bat, it’s Young Adult. Then the main character Veranix acts like every stupid teenage male you could imagine. He’s going after dealers and stealing their take each week? While completely ignoring going after Fenmere? Then, from a student perspective, he’s talented, very talented and coasts on that and is one lazy son of a gun instead of working hard. Then when he does go out at night, he does NO planning, no tactics, no strategies, just shoot, hit and run and kind of counts on his natural abilities and acrobat training to get him through. He’s a phracking idiot is what he is.

There were 4 distinct places where I almost DNF’d this. I hate stupid characters and Veranix was deliberately written as an angry, rash, stupid young man. Everybody else covers for him and instead of growing up and learning and becoming better, he’s just clueless about their sacrifices on his behalf. I became an angry middle aged man reading about this chowderhead!

The story was good though and that is why this got even 2 stars. It is also the reason I’m giving Maresca one more book to turn things around. But if the characters in the next book act just as stupidly, I’ll be coming down like a ton of bricks on that and abandon this author like a pile of donkey diarhea.

Join 409 other followers
Follow Bookstooge's Reviews on the Road on WordPress.com

Anyone Can Blog ~ Commenting Is Hard