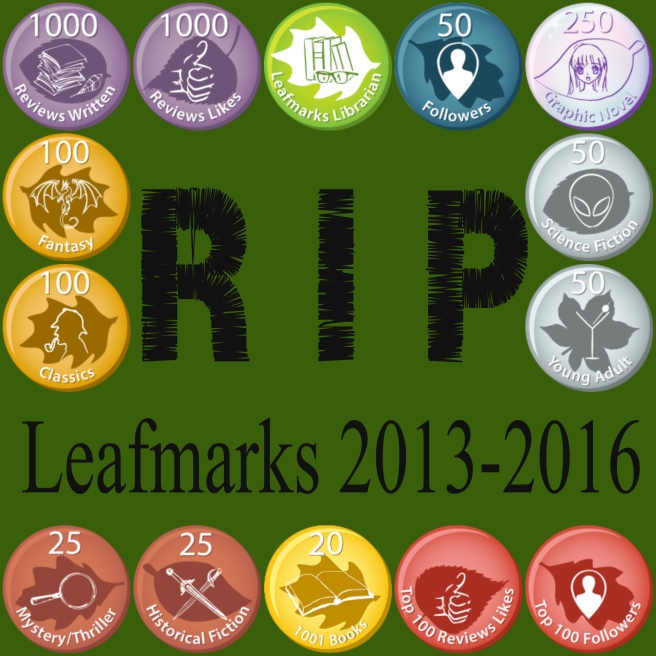 Today is the last day that Leafmarks will exist. They started up right after the Free Speech debacle at Goodreads in ’13. Sadly, while quite a few high rollers from GR came over, they just never stuck around. They all went back to GR where the people’s adoration was. Throw in the fact that one of the co-founders left after a couple of months to concentrate on her own blog [and stay active at GR as well] and things were off to a rough start.  Sadly, it just never really took off after that.

I enjoyed the site mainly because it gave me Librarian experience, which I’ve used here. It also had an export function. Which has been a lifesaver recently when I wanted to start keeping my reviews in an offline format.

I downloaded all my top Leafs and made a collage of them. I have to say, collecting Leafs made things a lot more fun. It was also nice to be in the Top 100 of several categories. I know, “big” fish in a small pond, but for my ego, it was enough.

So thank you Leafmarks. You tried valiantly. It just wasn’t enough.

On the same day that we get yet another non-response from Booklikes, I find out that Leafmarks is shutting down July 1st.

I am just throwing my hands up. I got nothing…

Join 409 other followers
Follow Bookstooge's Reviews on the Road on WordPress.com

Anyone Can Blog ~ Commenting Is Hard