This review is written with a GPL 4.0 license and the rights contained therein shall supersede all TOS by any and all websites in regards to copying and sharing without proper authorization and permissions. Crossposted at WordPress, Blogspot & Librarything by Bookstooge’s Exalted Permission
Title: Red Nails
Series: The Essential Conan #3
Author: Robert Howard
Rating: 4 of 5 Stars
Genre: Fantasy
Pages: 295
Format: Digital Edition

I enjoyed this book the most of all 3 of these Essential Conan books and I think it was a combination of slightly longer stories coupled with not having as many. The final part of the book, the “History” part was boring as all get out but I expected that as History and me are acquaintances by circumstances instead of friends by choice.

The History definitely showed up Howard’s racial bias more than anything in the stories. Purity of blood and the continual references to racial superiority or inferiority really began to grate.

The titular story, Red Nails, was probably the best Conan story of all I’ve read with these. From the killing of a monstrous lizard to an enclosed city with near insane inhabitants to a sorceress who feasts on live sacrifices, it just had it all. You could probably read that story alone and get enough of everything to decide if more Conan was for you or not.

I’m pretty pleased with this Essential omnibus that I read. I felt like I got a real taste of who and what Conan is about, what kind of author Howard was and it was just the right size so I’ve had enough without having too much. There are more Conan stories by Howard, and tons by other authors, but this has sated me so I feel no need to seek out more. I’d highly recommend this if you wanted to try out Conan or even simply wanted a better understanding of Fantasy from the early 1900’s. You are never going to go wrong by reading works that are foundational to the genres we have today.

This review is written with a GPL 4.0 license and the rights contained therein shall supersede all TOS by any and all websites in regards to copying and sharing without proper authorization and permissions. Crossposted at WordPress, Blogspot & Librarything by Bookstooge’s Exalted Permission
Title: The People of the Black Circle
Series: The Essential Conan #2
Author: Robert Howard
Rating: 3.5 of 5 Stars
Genre: Fantasy
Pages: 220
Format: Hardcover

4 stories involving Conan. While not exact, they do seem to move backwards in time, so while he’s king of the Hetman in the first story, by the time we get to the final story he’s a Sword for Hire.

Conan fights something, whether wizards, peoples or monsters, rescues nearly naked women and usually makes off with a boatload of treasure.

I wasn’t sure how this Conan read would go so soon after the first instalment. Thankfully, moving away from a full novel to shorter, more serialized stories worked rather well.

The first thing I noticed is just how well Howard can write. While the Conan stories are not in any way deep character sketches, Howards writes him in such a way that while sparse doesn’t feel flat. Conan was a real barbarian and Howard brings that to light with a deft touch. He also describes things in such a way as to evoke whatever emotion he is going for in the scene. He knows how to describe things precisely so as to guide you yet it never fell into purple prose territory either. It was a delicate tightrope and I thought he did a fantastic job.

However, the short story format fails us the readers. While all varying enough that they aren’t identical, in either scene or foe, the overall plotlines run almost along identical tracks. That wouldn’t be a problem if you read one story every other month or so. But reading 4 in a matter of weeks, well, it becames a little difficult to ignore.

Overall, I am pretty pleased with Conan and how this Essential Series is working out. I’ve got one more to go and then I think I’ll be satisfied with having tried this particular Hero out. 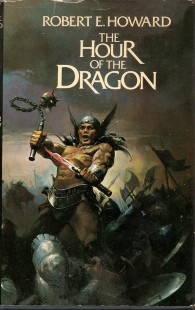 This review is written with a GPL 4.0 license and the rights contained therein shall supersede all TOS by any and all websites in regards to copying and sharing without proper authorization and permissions. Crossposted at WordPress, Blogspot & Librarything by Bookstooge’s Exalted Permission
Title: The Hour of the Dragon
Series: The Essential Conan #1
Author: Robert Howard
Rating: 3 of 5 Stars
Genre: Fantasy
Pages: 296
Format: Digital Edition

4 Conspirators, using a mystic gem of unimaginable power, resurrect a long dead wizard, Xaltotun. They plan to use his power to further their own aims. What they so carelessly forget is that Xaltotun might have plans of his own, like the resurrection of his whole nation of 1000’s of years ago from the Age of Dark Wizards.

One man stands in their way. Conan, king of Aquilonia. A fierce Cimmerian who took the throne by force, Conan is no innocent when it comes to the ways of wizards. After being overthrown by magic, secretly being taken captive by Xaltotun and then escaping, Conan tries to take back his country. Problem is, Aquilonia is rift with factions and Xaltotun, through his puppet, is playing those factions against each other. And should Conan unite the country, Xaltotun will just use his magic to destroy them all again.

With the help of the priests of a cultic god and a wild witch woman from the hills, Conan learns he must find the Heart of Ahriman and use its powers to overthrow Xaltotun. Only then will sword and spear be enough to route the human element. After several adventures, including pirates, a voluptuous vampire and priests of the dark god Set, Conan recovers the jewel.

Xaltotun is unaware and blithely goes to his doom. Every Aquilonian suddenly turns patriot and Conan takes his country back and paddles the backsides of the other nations that did him wrong.

This is actually an omnibus edition put out by the Science Fiction Book Club back in the late 90’s or or early ’00’s. It contains 2 other Conan books, which all consist of a series of short stories. This one, Hour of the Dragon, is the only novel in the book. There are forwards and afterwards by some editor who appears to be a big Conan fan and while slightly interesting to a big Conan fan, didn’t mean a thing to me. I don’t care about Howard’s personal life or that he was such a coward that he took his own life at 36. That doesn’t get sympathy from me but makes me despise him as a human. And that is just the type of thing I don’t want when going into a book.

Sword and Sorcery at its height, perhaps? This was Adventure pure and simple and there was nothing complicated about that. This is not about characterization or rich world building. Conan is a force of nature that hews and kills and fights against all odds and prevails.

While I enjoyed this, I also tend to enjoy crunchy Cheetos. I only eat Cheetos in the small snack packs now, as any larger amount makes me sick. This Essential omnibus is probably going to fulfill my Conan quota for quite some time. It is just the type of writing that you can enjoy but if you overdose, you’ll stay away from for the rest of your life. I want to be able to enjoy these stories even while realizing their inherent weaknesses. I mean, really, how many times can you read “mighty thews” and keep your eyes from rolling?