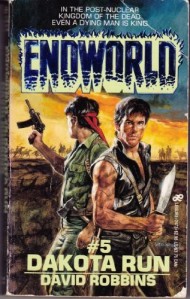 Geronimo is out and alone and runs across a feuding army of cavalry.

Blade and Hickock are dealing with a threat from the Doktor.

And everyone gets married at the end and is happy. Thank goodness.

This was not as eye rollingly bad as the previous books. Thank goodness for a nest of giant ants.

And things are shaping up for new allies and a much larger conflict. 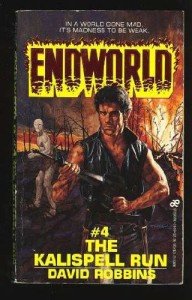 Alpha Triad is split up. Beefcake Boy [the man on the cover] and Token Indian Guy take Chieftess Hot Chick back to her clan because she claims they have the equipment the Family needs.

Hickock heads out after a hotblooded young idiot who gets himself captured while trying to prove how capable he is.

Meanwhile, back at the Camp…. the Power Monger is revealed and not dealt with.

Around the halfway mark I was ready to put this down. It was racist all around, culturally illiterate [a japanese guy who wants to kill the leadership of the family because he couldn’t win a sword? After 100 years, there shouldn’t BE any ethnic’ness left, sigh] and just as stupid [rippling brawny muscles is despairing because he’d left his darling Jenny back at the compound] as the previous books.

Then a switch turned in me and I sat back and enjoyed the 80’s badness of it. It was like a MST3K book, just without the funny commentary.

But lets be real, this is trash. I’m talking trailer living, twinky eating, beer chugging trash. How it continued for so many books [25+ I believe] is beyond me. I’m certainly not paying for these, even if I am continuing to borrow and read them.

And to continue my indie rants from before…

I believe this is some of the worst you can get from the 80’s. And it is still better than 90% of the indie offerings I see today in the Kindle SFF section. As absolute PANTS [man, I love foreign curse words, as they aren’t for me :-)] as this series is, as completely juvenile, mindless and cringeworthy as it continues to be, it is still BETTER.

Don’t talk to me about the Big Publishing Houses stifling creativity or such drivel. They were some chikusho good Gatekeepers and I for one miss that function. And don’t tell me that the Indie Cream will rise to the top through word of mouth, etc. A pound of Cream will still taste like crap if it is wrapped in 10 pounds of manure.

Hmm, lets see, what else can’t you tell me? I’ll get back to you on that.

Hopefully, this will be the last of my rants for a bit. Can’t allow such useless idiots to drive even one aspect of my life.

Alpha Triad finally makes it to the Twin Cities to pick up the medical equipment that Plato has requested.

Sadly, due to their complete and utter incompetence and total idiocy, the group gets separated and doled out among the various factions remaining in the city.

Thankfully, Brother Joshua brings them all together and peace and harmony float down like a gentle rain on them all.

And so they have a chance to get the equipment they need, but do they do that? Nope, they head right back to the Home to report the good news, because what difference can a month or 2 make, right?

This has moved far beyond silly or any such thing and has gotten into the down right stupid.

Alpha Triad takes Black Beauty with them back to the City, since she knows the lay of the land. But she doesn’t advise them and they don’t ask her any real questions. Then they decide it is a good idea to head into the city, on foot, at night.

From there, the decisions get even worse. The Triad, the different factions, all of them, just keep making the stupidest decisions one after another.The worst was right at the end when the group  has brokered a peace deal and decides to leave WITHOUT getting the equipment they came for. WHY?!?!? All that blood, death and fighting and now you just want to chuck it and do it later?

I wonder what Robbins was thinking when he wrote this stuff. In many ways, it seems like the logic of a 10 or 11 year old boy who has never actually even had a field trip but dreams up what he thinks an adventure would be like. My problem is that I can’t even make fun of it anymore. They act that stupid. I guess I’ll have to blame it on in-breeding because nothing else can account for such mental deficiencies.

One other issue that seems to be arising is that nobody ACTS like WWIII was 100 years ago. Everyone acts like it happened to their parents and they are just figuring out now how to survive in the world.

I’m giving this one more book to pick up even a half star’s worth or I’m done. Campy or whatever I can deal with, but not stupid.

Alpha group with Non-violence Spiritual Guy head out to try to get to the Twin Cities, again.

But they get waylaid by a new group. This group seems really organized, has info about the Family, controls mutates and the area surrounding the Twin Cities.

White hick cowboy man finds a 70’s retro blackgirl who just digs his jivey whitemeat and Big Burly main character wonders if his true blue eyed blond love still loves him after he’s been away a whole 2 days. And Indian man has a stereotypical cherokee beauty and her daughter show up at the Family’s compound. Babes abound for everyone!

I ended up giving this the Parody tag because it is impossible to take seriously. The supposed cream of the Warriors act like total idiots and even someone as civilianized as me can spot the issues they just ignore.

The women. Oh lordy, what a pubescent wetdream. A super busty black woman has fallen into enemy hands, is tortured and raped repeatedly and when rescued by the Intrepid Group, falls in love with the whitest of the white guys and acts like she hasn’t had anything happen to her. Goes so far as to offer herself to Cowboy man.

Thankfully the Indian women only shows up sick for about a page before the story moves on.

But what really got my goat was Blade [the main character] and his love interest. They are going to get married after the group successfully makes the Twin Cities run, but when the group stops at Thief River Falls and they spend 2 nights there, Blade is wracked with doubt and wonders if Lover Girl is thinking of him as much as he is thinking of her.

But even with all that, this story was fun and quick and showed a lot more potential than the first book. It also was very evident that this would be a paint by numbers series, which helped me to just ignore all the impossibly stupid things and enjoy the adventure side. This is going to be one of those series that I like to read and like to rip apart. It just will be 🙂 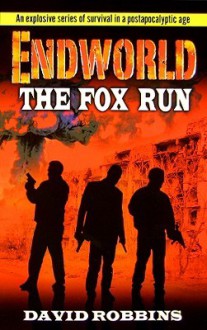 World War III has taken place 100 years ago and one man had prepared for it.

Now the group of survivors must go forth into the world as their own homegrounds are having deleterious effect on their lifespans.

Post-Apocalypse fiction.  It could have been good, but unfortunately, this was cringeworthily eye rollingly bad.

100 years, got that? 100 years to train everybody in your compound to defend themselves at a basic level. 100 years for roads to be taken over by nature [10 years of non-use and most roads will be undrivable. 15-20 years and they aren’t roads any more]. 100 years for other communities to either survive or completely fall apart.

The 3 main characters are always kidding about their being a “white man” and a “red man” as one of them is an Indian. The last Indian in North America. Because obviously of 15 couples at the beginning only the Indians married other Indians.

Then the women. Now, I am NOT a fan of women in the military but if you have a group of 70 people, in a completely hostile world, you train EVERY SINGLE ONE OF THEM to take care of themselves, from their childhood. However, the women presented here are full breasted lovelies just waiting to have babies. I’m all for that! But it isn’t realistic, nor even probable.

Finally,  guns and food. You CANNOT store enough guns, ammo and food stuffs for 70 people for 100 years. Logistically, it simply isn’t feasible. And your gene pool is too small.

So with those problems and some really stupid decisions all around and some poor writing, I found this lackluster. However, because I am such a generous guy, I am going to try the next book and hope beyond hope that this book was a fluke in this finely written epic series. *sarcasm*