Doomsday is not dead, nor doth he sleep, but he shall fail while Supes prevails [ha!]

Yeah, Doomsday isn’t dead and with what Superman finds out about him, it appears impossible that Kal-El will be able to defeat him again.

I really enjoyed this. Which came as a surprise to me because I remember it being the weakest of the 4 books and hence “remembered” not liking it nearly as much. Man, me and my Remembering.

While it was much shorter than Return of Superman, it still managed to pack in a lot of info and action. The Cyborg is back as well and sadly, his part was WAY too short and was almost a plot device just to keep him around for later use.  That was to bad because I think the Cyborg is one cool bad guy.

I think my nitpick was how Superman kept trying to deal with Doomsday. With the revelation of Doomsday’s evolving nature, it seemed kind of stupid that Superman just kept on hitting him, just like in the previous encounter. Find a blackhole and toss him into one of those. Mother Computer’s solution of sending him to the end of the universe and time, where Entropy would destroy him, felt like a copout but at the same time really manifested just how powerful and dangerous Doomsday was.

The action was good. Even while I was mentally tsk, tsk’ing Superman for just hitting Doomsday, it was still pretty cool. And Superman’s little Kryptonian battle gear, sword and all, definitely made the visuals better. Nothing like Superman as a knight. 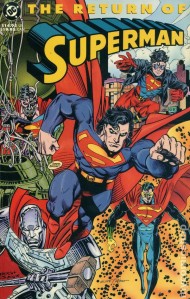 This review is written with a GPL 3.0 license and the rights contained therein shall supersede all TOS by any and all websites in regards to copying and sharing without proper authorization and permissions. Crossposted at Bookstooge.booklikes.blogspot. wordpress.leafmarks.com & Bookstooge’s Reviews on the Road Facebook Group by Bookstooge’s Exalted Permission.
Title: The Return of Superman
Series: The Death and Return of Superman
Author/Artist: Dan Jurgens, et al.
Rating: 4 of 5 Stars
Genre: Comics
Pages: 480
Format: Paper Graphic Novel

4 Supermen have appeared in Metropolis. One is a young clone with all the attitude and haircut of the 90’s. One is a man encased in steel who makes no claim to be Superman. One is a violent vigilante who has Superman’s powers but not his heart. Finally, one is a cyborg who claims to have been mysteriously rebuilt from kryptonian tech.

One of these is a traitor bent on the destruction of Humanity. Can they figure out which one of them is the traitor and stop him?

Only the real Superman can stop the destruction of the world [again].

My Thoughts: Spoilers Ahead Matey!

A fitting conclusion to the whole story arc.

The first thing that struck me when I pulled this book off my shelf yesterday was just how the garishly primary colors dominated everything. Nothing but Blue, Red and Yellow. That is one thing that makes comics stand apart from graphic novels.

My second impression was just how fast things developed. Now given that I read this in one afternoon from one book definitely helped that along. But all the pretenders are revealed and while the world is still reeling from trying to figure out which, if any, are the real Superman, the Cyborg suddenly is about to turn the world into a new War World?

Third, the utter ridiculousness of it all. The pure absurdity. However, that level is needed to pull something this big off. This story arc spanned multiple comics for months. It HAD to be over the top to keep the teens interested and wanting to spend their money.

Fourth, I still enjoyed this. It was fun, it was explosive, it was garish, it was high octane. It was everything I expect a comic book to be in other words. I don’t expect comic books to be on the same level as The Count of Monte Cristo. Reading this also brought me one step closer to reading Superman: Doomed which I bought back in January. I have not read that before. It is just as big and I think I’ll be able to judge it more objectively than I did Return of Superman.

In conclusion, this was just as big as I remembered while definitely belonging to my younger days.

Title: World without a Superman

In the aftermath of Superman’s death, hell breaks loose. A shady government agency steals his body, which Lex Luthor buried in a very public funeral attended by the JLA and the rest of the heroes in the DC universe.

At the same time, Lois has to deal with Clark supposedly having gone missing, while she knows he is dead. Ma and Pa Kent are being torn apart with their private grief and Jonathan ends up in the hospital with a heart attack.

And then things get weird with some sort of afterlife scenario where Pa Kent has to bring back Superman from a potential hell.

And then right at the end, it appears that 4 Supermen have come back.

This was fun and as bright, splashy and soap opera’y as one could wish for. This was everything a comic should be. Larger than life characters and scenarios.

Of course, I was rolling my eyes almost the whole time. I mean, super guns being sold to gangsters is the big problem in Metropolis? And Lex Luthor being mad because HE didn’t kill Superman? Ay yi yi.

I enjoyed every page though. And it brings me once book closer to Doomed, where it looks like Superman is infected by Doomsday. I am looking forward to that!

Title: The Death of Superman

A creature dubbed Doomsday wreaks a path of destruction towards Metropolis. Along the way he takes out the entire JLA and it is now up to Superman, alone, to stop this unstoppable monster.

This book has a lot of nostalgia built in, so my thoughts might be a bit wander’y here.

I was not much aware of the DC universe when this storyline was taking place. I accidentally picked up the next to last comic in this crossover [there are 7 comics comprising this graphic novel] and since I was used to once a month comics and not used to crossovers, I waited until the next month to pick up what I thought would be the finish, only to find that the Death arc had ended and some other storyline had started up. I couldn’t afford to buy a comic EVERY week, so I pretty much gave up on this.

Fast forward about 2 years. I now had a summer job of painting and the whole Death and Return story arc had finished and was collected in 3 graphic novels. I’d been saving up all summer and on one trip to Barnes and Noble I spent my “stash” on all 3 GN’s. They blew me away and made me a life long Superman fan.

So now on to my thoughts this time around.

First off, I had forgotten how garishly colored comics are. After novels and walls of text, it is kind of fun to see wicked BRIGHT primary colors.

Second, the time frame from beginning to end was less than 8hrs. I had forgotten that this was lightning fast. Doomsday just explodes onto the scene, destroys a whole slew of superheroes and then proceeds to kill Superman. He KILLS Superman.

Two titans brutally beating each other with their fists and any material on hand. While the artwork varied comic by comic [different artists obviously], the intensity just came through in each panel.

I wasn’t sure if I was going to like this as much as before, but I am thankful to say that my 20+ year old paper copy, while now yellowed and slightly bent from standing cockeyed on my shelf, is just as entertaining and good as it was back then.

And I think that the following 2 pictures encapsulate the feeling of this whole book.