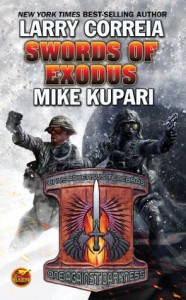 Valentine and Lorenzo are back in action. Of course, Valentine is being totally mind raped Majestic in a secret prison. Lorenzo is forced to rescue him, in exchange for information on his missing brother Bob.

Exodus recruits both of them to go after a new Warlord who enslaves whole village and then has the slaves become his devoted minions. Something otherworldly would seem to going on.

Sadly, this suffers not only from “middle book” syndrome, but also from the death of Lorenzo AND the fact that there is no book after this. It felt like a project that got cancelled.

That really skotched my enjoyment of this. I don’t mind when the good guys die or suffer a setback, IF they have the chance to come back and be victorious. But they didn’t here and it doesn’t appear they ever will. Also, I wish the supernatural element had played a much bigger part. Just like in the first book, this was a military escapade first with just a Hint of supernatural. 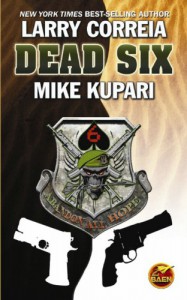 Michael Valentine, former marine and mercenary extraordinaire, has burnt out. Trying to live a “normal life” as a security guard, Valentine is going out of his mind. One day a former team mate offers him a job of a lifetime. Making money hand over fist for the United States Government while bringing the War on Terror to the terrorists in places they thought were safe.

Lorenzo and Valentine are on a collision course. Women get involved, things slightly Cthulhu’ic are involved and backstabbing and betrayals are the keywords of the day. Will Valentine and Lorenzo kill each other or save each other?

Wow! Just wow! Valentine and Lorenzo are apparently on two different paths when suddenly they’re on a collision course. Then suddenly they’re reluctant allies. Now that sounds like a whiplash ride, but considering this book is over 700 pages long, the process was gradual and realistic.

Having the dual viewpoints, essentially telling 2 stories, worked. Each POV was prefaced by which character it was and the location, and that was very helpful.

There was a group called Exodus that played a very brief part. They seemed to be some sort of super vigilante group that was driven by the need for Justice against those who could never be brought to Justice by ordinary means. There was another group called Majestic, which was more referred to than anything else. I am assuming they will both play bigger roles in the next book.

There is an object of power, human sacrifice and a heavy unearthly feeling in parts. That is why I gave this the paranormal  tag, even though it was pretty strictly a gun fest.

The violence level was pretty high definitely earned the ultra-violence tag. Brains, blood and body parts blown all over the place. High calibre weapons do a lot of damage and neither author shied from describing such carnage.

I know this doesn’t really tell why I liked this so much, but I stayed up until almost 11pm two nights in a row reading this because I just couldn’t put it down. I think that speaks volumes in and of itself. I am really looking forward to the sequel, Swords of Exodus.

Exploring the world of ideas through books

There's always another book to be read.

A Sky of Books and Movies