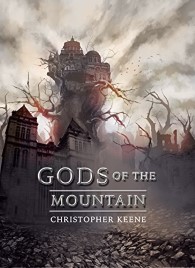 This review is written with a GPL 4.0 license and the rights contained therein shall supersede all TOS by any and all websites in regards to copying and sharing without proper authorization and permissions. Crossposted at WordPress, Blogspot & Librarything by Bookstooge’s Exalted Permission
Title: Gods of the Mountain
Series: Cycle of Blades #1
Author: Christopher Keene
Rating: 1.5 of 5 Stars
Genre: Fantasy
Pages: 307
Format: Digital Edition

The author of this indie book convinced me to review it with a rather humorous comment on my “Review Policy” page. Asking for a bad review, that I can handle. He seemed like a nice enough guy when we emailed, so I thought “Sure, why not take a chance.” And if you read the reviews over on GR, it DOES sound like a bunch of paid shills. And he has a BA in English Lit (I believe), so it couldn’t be THAT bad, right?

First hiccup was him emailing me a second version. This was supposedly released in 2017, so I was expecting a finished product. When an author keeps tweaking a book, well, that doesn’t bode well in my eyes.

Second hiccup was him letting me know, in Mid-April, that it was going into audio production and had I had a chance to “look it over” yet . I only got the book in the beginning of March and needed to work it into my rotation.

So, legal schmegal crap: The author gave me a copy of this book for an honest review and boy howdy, is that what he’s going to get. Remember, he ASKED for this.

The Kingdom of Tyrania was conquered by the Kingdom of Aavaria because the Aavarians wanted control of the only supply of a special kind of wood that could be turned into swords that would suck the life out of anyone receiving even a small wound.

Faulk watched as his Commander died in a duel to the Aavarian General and as his homeland fell. Now, 3 years later, he’s a mercenary for hire, drowning his despair with drink. He meets up with a former fellow soldier who specialized in assassination. This Kessler shows Faulk some magic that only a specific tribe in the mountains are supposed to be able to use. This tribe, the Lunarians, are dedicated to pacifism. Kessler was taught by an exiled Lunarian and he begins passing on his knowledge.

3 Lunarians are sent to Tyrania to stop outsiders from using the symbol magic. This will involve taking one of the users before the Lunarian’s gods and those gods severing all connections which will stop that user and all users associated with the initial user.

Faulk goes with them to ostensibly learn more magic, as he’s unaware of the gods true purpose. He ends up being stripped by the gods and then someone reconnecting back to the magic using another form.

While this is happening to Faulk, the Lunarian Exile has set in motion a chain of events that leads to his ascension as Ruler of Tyrania. He makes one of the magic trees grow using all of the stolen life force from the magic blades.

The book ends with Faulk and his Lunarian girlfriend, along with her ex, heading out to explore Aavaria and the Lunarian Exile planning on worldwide conquest.

First off, the writing. In my recent “Quote” post, I posted just a tiny bit of the book. There were a handful of instances of like awkwardness that had me guessing just what the author meant. I’m not talking about story plots, but plain old grammar use. You can find Editors who will look for and show you how to fix those type of things. Sure, they cost money, but do you want your book to be good? I talked to someone I know, who also has a BA in English Lit, and she said the instances I showed her were what she experiences when reading chinese novels translated by highschool students.Dinged off a ½ star for those instances.

Second, the magic system. The way it was really introduced had me going “That’s a Brandon Sanderson Mistborn knockoff!” Pushing and pulling against magic swords and daggers to move objects or yourself? Vin!

Thankfully, it does go on to be a “little” more original, but the way it was introduced really wasn’t handled well. Problem is, later things get messy again when Faulk gets cut off from the magic but “magically” is able to reconnect using some other way. Terms are thrown around but it made no sense to me. This happened near the end of the book though so I was pretty much past caring if I had missed something. Ding. There goes another ½ star.

The characters. I’m not sure if I was supposed to be rooting for anyone, or just against the Aavarian overlords and then the Exiled Lunarian. Faulk was this uber-sceptic with the philosophy of a 2nd grader. The love interest, Yuweh, was this magical powerhouse but then would turn around and be this incredibly naive and simple “girl”. Purposeful or not, I didn’t like either of them. At the end, there is this semi-sex scene between them. Up to that point Keene had kept things clean. But they are at a pool bathing together and he describes their foreplay like an awkward 14 year old and then ends with something like “and they laid down and made love”. Now, don’t get me wrong, I don’t WANT to read erotica, or even semi-graphic sex scenes. But it offends my completist sensibilities that you’d clumsily yet graphically describe their foreplay but not the actual act? Considering that nothing like this is described earlier, its obviously put in to titillate the reader. But the only people going to be titillated by such amateur descriptions are 14 year old boys. The rest of us are just going to roll our eyes. Ding, another ½ star.

There is a bunch of other stuff too, but really, isn’t that enough? I’m not getting paid as an Editor here.

So lets do the math, because nothing is sexier than a man in suspenders and a flannel shirt doing “math”.

3 Stars is my starting point.

Add 1 for getting me to read the book in the first place.

Subtract ½ for mucking around it with it AFTER it is already published.

Subtract ½ for acting like an anxious man whose wife is pregnant with their first child.

Subtract ½ for the magic system and Sandersonitis.

Subtract ½ for the terrible and just plain embarrassing foreplay scene.

The grand total should be…..* calculator noises *

All kidding aside, this wasn’t the worst book I’ve ever read, not even close. But it was barely adequate with enough issues that I certainly won’t be reading any more by Keene. Between this and Algorithm of Power, I have also reaffirmed my decision about indies in general.

…he dreaded being turned on suddenly by one of them.

page 186 of Gods of the Mountain

I realize the author means “attacked by”, but that is some really awkward writing. So of course, this is what sprang to mind: 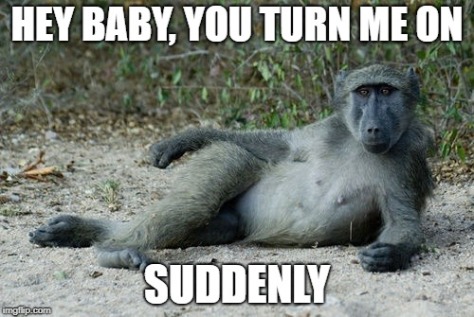