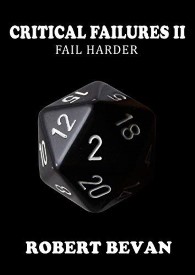 This review is written with a GPL 4.0 license and the rights contained therein shall supersede all TOS by any and all websites in regards to copying and sharing without proper authorization and permissions. Crossposted at WordPress, Blogspot & Librarything by Bookstooge’s Exalted Permission
Title: Fail Harder
Series: Caverns & Creatures #2
Author: Robert Bevan
Rating: 1.5 of 5 Stars
Genre: Fantasy
Pages: 305
Format: Digital Edition

The Gang of merry losers runs into some other humans who have been sent to this fantasy world by Mordred. They team up with them and learn of yet another group, of middle graders, who were Mordred’s favorites and are sure to run rampant once they learn of his demise.

Katherine, Tim’s sister, is kidnapped by a vampire who has also been brought here by Mordred. He turns her before the group can rescue her but they do rescue her and kill the vamp. With the loot and stuff they raid from the dead vamp’s castle, they pay a dodgy magician to get Tim back to the real world so he can find Mordred’s dice and figure out how to get everyone back.

Tim makes it back, but still in his halfing body and finds Mordred still alive in the freezer. The dodgy magician, having a glimpse of our world through Tim’s mind, decides he wants to check things out and brings the whole Gang back with him.

You know, I barely even noticed the profanity this time around. However, the reason I didn’t was because of the crass humor and the complete stupidity of just about ALL the characters involved.

This group of people who got sucked into the fantasy world? They deserve to die. In fact, the United States is a better place if these people really did die. The fact that scum like them get their vote to count as much as mine, it infuriates me.

Yeah, I was pretty pissed off for almost the whole book. That is how pathetic these people were. So I’m done. I knew I was going to be done with this book one way or another, but my goodness, the amount of idiocy the characters packed into a mere 300 pages was astounding.

Don’t get me wrong, this has nothing to do with them being hardcore gamers. I can sit around and play Magic the Gathering for hours on end. But I’m not an idiot who just does whatever he feels like whenever he feels like. I realize I haven’t pointed out specifics for you to judge for yourselves. But just think of someone you know who does what they want, when they want, regardless of consequences and you have this group. I’ve been using the term “stupid” but it is more along the lines of irresponsible in the worst way.

I still would like to thank Swords & Spectres for his very enthusiastic take on this series. For some non-frothing at the mouth reviews, check out his reviews. Maybe he can convince you to read them. 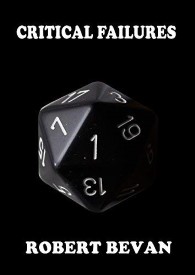 This review is written with a GPL 4.0 license and the rights contained therein shall supersede all TOS by any and all websites in regards to copying and sharing without proper authorization and permissions. Crossposted at WordPress, Blogspot & Librarything by Bookstooge’s Exalted Permission
Title: Critical Failures
Series: Caverns & Creatures #1
Author: Robert Bevan
Rating: 2 of 5 Stars
Genre: Fantasy
Pages: 284
Format: Digital Edition

A group of RPG gamers have put an ad out to a Cavern Master, as none of them want to do the hard work. A man shows up at the Chicken Shack, in cape and with all the other accoutrements a Cavern Master could need.

These gamers are jackasses. So they hassle the guy for wearing a cape and take their game playing very casually. This enrages the Cavern Master and has each of the players roll his special dice. This transports them into the game as their characters. The Cavern Master is interrupted by the sister of one of the players and her boyfriend. They too are transported into the game.

Shit happens and the gang gets separated, some in jail, some in the forest, more hijinks, mixups, etc. They all eventually get together, find out that the Cavern Master has done this to other people and trick him into a situation where he has to release them or die. Unfortunately for them, he dies and they’re stuck in the game world with no way to get out.

Swords and Spectres has been reviewing this series and I thought I’d try it. He did warn me about the profanity and folks, he was NOT kidding. These are 20 something losers with the accompanying attitude. Self-absorbed, filthy mouthed, caring about no one or anything but themselves. I was actually rather glad that they got theirs by being pushed into the game. Unfortunately, they are just as horrible in game as they are out of the game.

The humor was right up my alley and I kept snorting and laughing out loud but honestly, it was wicked crass and relied on a juvenile humor about death and body functions.

Even with that, I’l be reading the next book. However, since I’m pretty sure it is just more of the same, I expect to stop the series then.