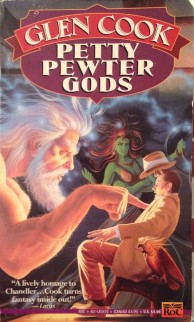 This review is written with a GPL 4.0 license and the rights contained therein shall supersede all TOS by any and all websites in regards to copying and sharing without proper authorization and permissions. Crossposted at WordPress, Blogspot & Librarything by Bookstooge’s Exalted Permission
Title: Petty Pewter Gods
Series: Garrett, PI #8
Author: Glen Cook
Rating: 2 of 5 Stars
Genre: Fantasy
Pages: 296
Words: 80K

TunFaire is in a state of unrest; with the sudden end of the war in the Cantard, returning former soldiers are at odds with the half-breeds and immigrants who have taken their places in society. Garrett, however, has his own problems to worry about – he gets knocked out, brought before a group of small-time gods known as the Godoroth, and forced into working for them. The goal: find the “key” to the one remaining temple up for grabs in TunFaire, and do so before the Shayir, the Godoroth’s rivals. The Shayir find out about the Godoroth’s plans. The Shayir capture Garrett and give him their side of the story. Only with the help of a renegade Shayir called Cat does Garrett manage to escape.

As the civil unrest escalates into full-fledged street warfare, the Godoroth and Shayir elevate their search for Garrett, and Cat, who has her own agenda, is apparently the only one Garrett can trust. When the battle between the Godoroth and Shayir spills over into the world of the living, causing madness in the streets of TunFaire, the more powerful gods of the city decide it is time to intervene. After an epic battle between gods, Garrett hopes the trouble is over, but the Dead Man thinks there is still a missing piece or two to the puzzle. Eventually, the Dead Man deduces that there was yet another party behind the struggle between the Godoroth and Shayir. When everything settles down and is sorted out, the remaining gods go back to their own business, leaving Garrett to go back to his beer.

The only reason this got 2 Stars from me is because of the momentum the series has built up previously in how it entertains me. Well, it just used up all that capital getting me through this piece of drek.

Garrett has always been a pig but this book it seems like Cook relied exclusively on that and man, it really frustrated me.

In one example, he sees that a beautiful redheaded woman is spying on him but making no effort to hide. Which he deduces that she wants him to chase her for some reason. When she takes off into a bad part of Tun Faire Garrett deduces there will be an ambush, and he still keeps chasing her. And there is an ambush, that he’s not really prepared for. It just made me mad. Then, after he’s gotten involved with the petty pewter gods and has to try to avoid detection, he goes and gets roaring drunk with some bum and pretty much blows his cover and makes it impossible for him to help himself. Garrett was at his worst in this book and I hated it.

If the next book is just as un-enjoyable, I’ll quit the series before it gets even worse.