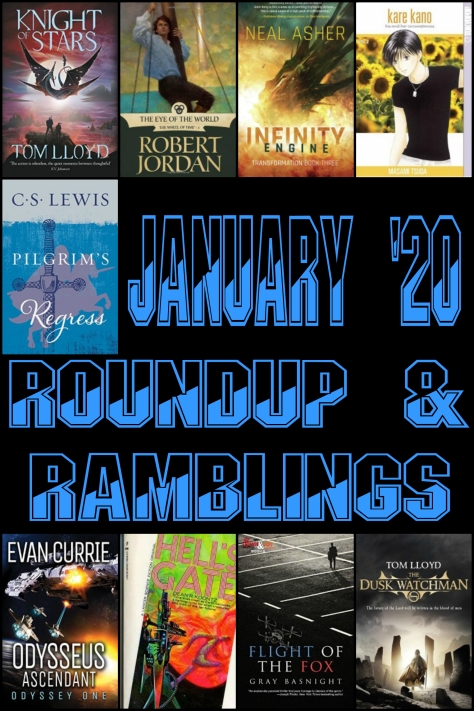 Alien vs Predator was 10,000% worse than my memory of it. My very sensibilities felt violated by all the brainless stupidity. Thankfully, I’m going to be watching Pixar’s UP for February so I know I’m getting a good one.

I’ve realized that 2 books a week is my new baseline. So if I get more than that I’ll take it and be happy about it, but I’m not expecting that. Expectations are the key to staying happy.

Did my Yearly Review right at the beginning of the month and felt pretty good about how ’19 had gone. We’ll see how ’20 goes in comparison.

I also joined up with Devilreads (for about the umpteenth time). Just for the pretty year-end stats though. I’ve only been rating books and putting them on shelves, no reviews. Feel free to friend/follow/whatever but I really have zero plans to interact, too many bad memories for that.

Survival Saturday was Stroganoff. It was a complete tie, as I disliked it and Mrs B liked it enough to save it for work.

Part way through the month our router died and we had issues getting another one to work. With only 1 hardwired connection available for a time, our internet time dropped considerably. I was not a fan of that. It did allow me to write up a bunch of posts for February though so that month is looking like a cake walk already. Thankfully, by donning my super secret hero identity of Dr. Lord Bookstooge, with the help of the Greater Power of IT, I was able to get back online before the end of the month. One week and it was harrowing enough.

I also found out that Christopher Tolkien had passed away. Makes me wonder what is on the horizon now that the strict gate keeper is gone.  I have to admit I have a bad feeling. I’m guessing cash cows and greedy 4th generation Tolkiens. I’d love to be wrong though.

Started up my giveaways again. Put a bunch of small stuff together for the Hodgepodge Edition.  This give-away is running until February 8th, so feel free to enter until then.