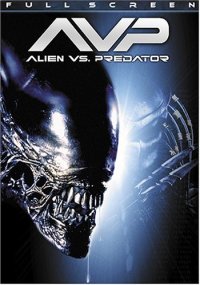 Anyone with the reading skills of a 3rd grader could figure out the basic premise of this movie. But just in case there are any first or second graders who read my blog…..

This is a matchup that fans have wanted for years and years. Aliens fighting Predators, who will come out on top? And will Earth survive?

Quick and dirty synopsis. Weyland Industries finds a hidden pyramid in Antarctica and sends in a team to grab all they can before other corporations make their move. Unknown to anyone, the pyramid is a nesting ground for Aliens and a testing ground for young Predators. If the Predators kill the aliens, they get Predator Cred and Big Boy, err Predator, Pants. If they lose, the whole area gets nuked.  Everyone but one woman gets killed and she teams up with the lone surviving Predator to take down the Alien Queen. Predator dies, Alien dies, Human survives. The movie ends with a chest burster Alien coming out of the dead Predator’s chest, with a Predator set of mandibles, so some sort of Predator/Alien hybrid.

For the record, and to my everlasting shame, I own this on dvd. I really enjoyed it the first time I watched back in the day, as the action was almost non-stop. On this re-watch though, every glaring weakness shone as bright as the sun to me.  I don’t even want to get into specifics, as there are just too many and I don’t want to relive them 😦

This was an Action Movie, but even Action Movies don’t have to be brainless fluff. This wasn’t even fluff though, more like dryer lint. Dryer lint after running a whole load of jock straps through the dryer. Just gross. I’m actually tempted to throw this movie into the trash as I am NEVER going to watch it again.

I realize I haven’t said much, but my goodness, this movie just doesn’t deserve having anything being said about it. Except that there was a sequel, which even I acknowledged upon my first watch that it was one of the worst movies I’d ever watched. It made this movie look like an Oscar Nominee.

Next I’m planning on watching UP. Lashaan mentioned it in his Goodbye 2019, Hello 2020 post. I need a movie that will make me feel all the feelz.

You're ten seconds from watching an amazing film...