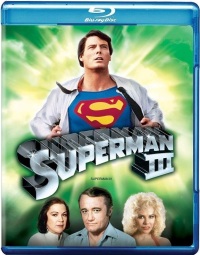 So, Superman III with its boring as all get out bluray cover. That barely looks like Christopher Reeve anyway!

This was released in 1983, has no “directors cut” and as far as I know generated ZERO controversy.  Let’s look at an alternate cover, shall we?

Now THAT cover does a MUCH better job of showcasing just what kind of movie this is going to be.

Richard Pryor is an out of work bum whose unemployment benefits have been denied. He sees a computer programming training course on the cover of a book of matches and next thing we know he is working at a computer coding computer. Oh, we get sequence from his training where he makes his computer do something that even the trainer thought was impossible. Thus is set the stage for Pryor’s genius as a computer programmer. He gets his first paycheck and sees that 1/2cent is missing. He wonders where all those 1/2cents goes and programs the computer to put them all into his account. Next payday he gets an extra paycheck for $85K. Of course, this doesn’t go unnoticed by the Big Evil Capitalist running the company but they have no way of tracking who did it. Until Pryor screeches into work driving a new ferrari.

A lot of silliness ensues. Trust me, it isn’t worth typing out. But needless to say, a secret government satellite that can control the weather is involved.

Pryor, under the direction of the Evil Capitalist, creates a supercomputer capable of destroying even Superman. It attacks Superman, Pryor has a change of heart and rescues Supes. Supes gets some super acid and one little canning jar’s worth sends the entire computer system (about a large cave’s worth) crashing into a fiery, lava’y pit of destruction.

Yep, one little canning jar destroyed all of this!

Supes fixes all the problems his silliness caused (synthetic kryptonite was involved) and is once again the world’s hero. The movie ends with Lana Lang moving to Metropolis and working at the same paper as Clarke and Lois, as a secretary.

Now, I had memories of this being silly, campy and almost stupid. I definitely got the silly and campy part right. I think the “stupid” would depend more on just how mean you were feeling at the moment. Pryor was supposed to be comedic and in many ways he was, but it was over the top, rub most people the wrong way funny.

There was one scene where Superman has to fight himself, as he’s possessed by the kryptonite. I thought they did an excellent job and that Reeve did an absolutely fantastic job of showing a mean, brutish, 5 o’clock shadow drunk Superman. He looked mean and animalistic. I’m not one to usually notice an actor’s ability, but between Reeve making Clarke Kent and Superman truly different people and this time around portraying a good and bad Superman, I have to admit that the man was an ACTOR! It was also pretty fun to realize that the actress who plays Lana Lang is the same actress who plays Martha Kent in the tv series Smallville.

This was definitely the campiest of the movies so far. I thoroughly enjoyed watching this but I’d only recommend this to others if they are a huge Superman fan or like watching the acting skills of Christopher Reeve.

Thoroughly reviewing Old TV Shows, Movies, and Books Before You Forget Them

Tip the Wink
The diary of my stomach~