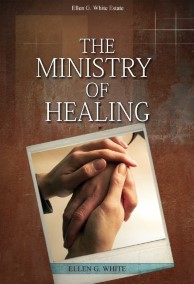 This review is written with a GPL 4.0 license and the rights contained therein shall supersede all TOS by any and all websites in regards to copying and sharing without proper authorization and permissions. Crossposted at WordPress, Blogspot & Librarything by Bookstooge’s Exalted Permission
Title: The Ministry of Healing
Series: ———
Author: Ellen White
Rating: 3 of 5 Stars
Genre: Non-Fiction
Pages: 355
Format: Digital Edition

White reiterates how Jesus’ ministry was as much physical healing as it was a forgiving of sins. She then talks to physicians and nurses about how they should ministering to both soul and body in their duties. Finally, she goes over various healthful habits that the laity can do on their own to help keep themselves healthy, thus ensuring that they are able to reach out to non-Christians.

Most of my issues with this book are the same exact ones that I had with The Great Controversy. So no need to re-hash them all. With just a couple of exceptions. Those I will add right now.

White claims that cheese is completely unfit for human consumption. My guess is because the process of creating cheese is pretty much letting milk rot. Be that as it may, I vehemently disagree. I’ll agree that cheese can be unhealthy in terms of fat and cholesterol, but completely unfit for consumption? I don’t think so! I would give up beef before I give up cheese (and to be honest, I really don’t eat red meat any more. Turkeys and chickens for me). The second issue is her saying that pickles aren’t to be eaten either. I’m not nearly as big a proponent of pickles as I am cheese, but I regularly eat a small jar of Vlasic kosher dill spears every week. For me, they are a great way to get salt back into my system from the physical labor I do all day and get some yummy crunch. They serve a purpose and I am not just eating them for the taste (even though I do like the taste of dill pickles a lot).

With that out of the way, I’ll talk some about what I do agree with. Just like in my Quote Post earlier this month, White directly addresses Appetite. All aspects of a Christian’s life is to be under the control of the Holy Spirit. A loss of self-control, which is one of the Fruits of the Spirit, shows that you aren’t as mature as God wants you to be in your Christian Growth. And a deliberate loss of control is a spurning of what God offers you. Overeating is a small thing in and of itself, but the consequences of a life of overeating lead to what we see in America today (obesity numbers ballooning up and causing all sorts of health issues) AND it shows that Christ is not in control of your life, your Appetite is. Gluttony isn’t something we hear preached about from the pulpit any more, but considering the typical American lifestyle, I think it should be. White wrote this back in 1905 and it is just as appropriate today as then, if not more so.

Alcohol. I am a teetotaler, someone who abstains from alcohol completely. I was brought up this way and nothing I’ve seen in in other’s lives, even Christians, makes me think that another option is open to me. White was part of the Temperance Movement of her times, which had a big hand in passing Prohibition back in the 20’s. Where White and I part ways is that she categorically condemns alcohol. That goes beyond what the Bible says. The Bibles tells Christians to NEVER get drunk but it does not forbid alcohol. However, the amount of people who can walk that line is small and from my own anecdotal evidence, should not be used to justify drinking at all. I don’t think Christians should drink. The negatives of alcohol far outweigh the positives and I have seen too many lives destroyed, or seen the collateral damage from such a self-destruction. It is like having a lion on the end of a chain attached to your wrist.

Finally, White goes over the importance of proper dress (both for modesty and health), fresh air, exercise and proper ventilation in any living quarters. A lot of the specifics are kind of like “well yeah…” to anyone who lives today, but it just goes to show how far ahead of her time White was. I also found that most of these things I was already doing, as I work outdoors at a physically laborious job.

To end this, I would re-title this something along the lines of “Aunt Ellen’s Big Book of Homilies”. Bits and pieces of wisdom but not something you should create any theology from.