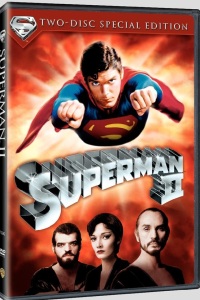 Yee haw!  This was a fun movie. A direct sequel to Superman, things start out with a big bang. Terrorists have a hydrogen bomb in the Eiffel Tower and Lois Lane is there investigating. Supes saves the day and takes the bomb into space where it explodes. However, said explosion intersects the Phantom Zone crystal the 3 criminals from the first movie were exiled into. They are set free and head to Earth. Lois Lane figures out Superman is Kent, Supes gives up his powers to be with Lois and the Kryptonians take over Earth. Kent gives up Lois and gets his powers back in the Fortress of Solitude. Lex introduces himself and promises to give them the son of their old enemy Jor-El.  A big fight ensues in Metropolis before Superman flies away when he realizes how many people will die.  Everyone ends up in the Fortress of Solitude where Lex betrays Superman only to have the tables turned. The Kryptonians are turned into ordinary humans and fall to their deaths in the depths of the Fortress.  Superman super kisses Lois and makes her forget knowing he is Clark Kent. The World Is Safe, Once Again.

Yee haww again I say! I had so much fun watching this. It was definitely bordering on the campy in places but considering it was 1980 it was no surprise. The villains were appropriately tight leather’y shininess and they looked bad ass. Having 3 other beings with the same powers as Superman was a fantastic move.  Luthor was comic relief more than anything and his continued demands to be King of Australia had me rolling.

The idea that Superman couldn’t be with Lois unless he was a human was a bit foreign to me, as I’d grown up with Lois and Superman as a couple. Heck, in the Death and Rebirth of Superman storyline in the comics in the 90’s, Clark and Lois were engaged. There were no reasons given, it just was “one of those things”.  It was refreshing to see a hero simply do something without spewing all his inner thoughts to the audience.  When Superman gives up his powers I was expecting a monologue from him or Lois about his duty to the rest of the humanity.  Imagine my pleasant surprise when it simply didn’t happen.

The film’s biggest weakness is what most superhero films suffer from. That is, not being an origin story.  Once the creativity has been expended on the origin story it seems like most movie story writers can’t write themselves out of a paperbag. This also had more in common with the Adam West version of Batman than any of the more modern superhero movies. Actually, if you do the math, it is literally closer to Adam West too, sigh.

You know, reviewing movies is tough. I could never be a movie reviewer. With that being said, I’ll be watching the director’s cut of this movie and reviewing the differences in a week or three.  I wonder if doing this counts as some sort of disability on my part? Maybe I can get money from the government!