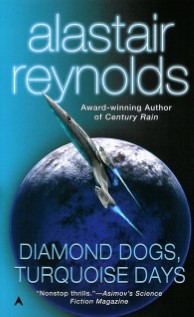 This review is written with a GPL 4.0 license and the rights contained therein shall supersede all TOS by any and all websites in regards to copying and sharing without proper authorization and permissions. Crossposted at WordPress, Blogspot & Librarything by Bookstooge’s Exalted Permission
Title: Diamond Dogs, Turquoise Days
Series: Revelation Space #5
Author: Alastair Reynolds
Rating: 4 of 5 Stars
Genre: SF
Pages: 296
Format: Digital Edition

This book consists of the two Revelation Space novellas that make up the title of this book.

Diamond Dogs follows a man driven to explore a mysterious tower on a forsaken planet. The tower is made up of rooms with a puzzle in each room. Answer correctly and the door to the next room opens. Answer incorrectly and the Tower punishes you. This man gathers a group together and they begin the journey. They have a geneticist with them who helps change their bodies and minds to answer the various challenges. Along the way it is revealed that the man is actually a clone of the original man. Each clone is programmed with the memories of all those who came before and convinced that that particular clone CAN beat the tower. Eventually, only 2 other members of the group and the clone survive and the 2 remaining members turn back before they die. The clone continues on. Eventually one of the members can’t resist the lure and the story ends with him sneaking off on a spaceship to return to the Tower.

Cheery stories, eh? I’d read the first one in the book Beyond the Aquila Rift back in ’16. I couldn’t remember if that was the whole story or not. I enjoyed the story this time around too but my goodness, it was depressing. Not only the clones (all of them) megalomania but then the story ending with the other main character being drawn back by his own lust for knowledge. So good and evocative but I just groaned inside.

The second story was new to me so that made it quite fun to read. The ending wasn’t quite what I was expecting but considering Reynolds’ penchant for extinction events, once I thought about it it didn’t really surprise me. Reynolds is definitely a gloomy gus of a guy so don’t expect human exceptionalism to be part of the story. We don’t get to pull a rabbit out of our collective hat and save the day.

I really liked that Reynolds didn’t have 3 story plots going on that ever so slowly tied together. A good way to start the month out.