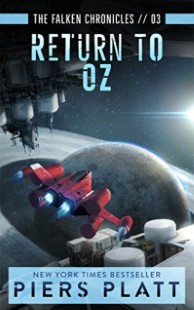 This review is written with a GPL 4.0 license and the rights contained therein shall supersede all TOS by any and all websites in regards to copying and sharing without proper authorization and permissions. Crossposted at WordPress, Blogspot & Librarything by Bookstooge’s Exalted Permission
Title: Return to Oz
Series: Falken Chronicles #3
Author: Piers Platt
Rating: 3 of 5 Stars
Genre: SF
Pages: 270
Format: Digital Edition

Having survived Olympus and meeting Sef Weaver’s daughter, Syrio needs to know what has happened to Sef. He gets back on board the ship that houses the virtual world and makes his case to the Committee to allow him to go back into Oz and to convince Sef to take responsibility for the murder he committed. Syrio is denied his request but the commander of the ship allows him to go back anyway.

At the same time Sef’s daughter begins digging around the cold case back on Earth to see if she can find anything to help exonerate her father. The more she digs, the more things don’t make sense. Eventually it is revealed that her grandfather was the mastermind behind the kidnapping and the murder that was pinned on Sef.

While the investigation is going on, Syrio finds Sef but Sef won’t admit he committed the murder and Oz won’t let Sef go until he shows remorse for the murder he was convicted for. Syrio reveals the secret of Oz to Sef which shuts the program down. Both men are then sentenced to the real prison planet. With the revelations by Sef’s daughter their sentences are reversed. Sef is returned to his family and Syrio becomes the new head of Oz.

This was a return to the first book. No dinosaurs, no people getting eaten, nothing exciting. The whole “mystery” solving aspect was very different from the previous 2 books but it wasn’t very interesting. When a rookie like Sef’s daughter can figure things out and the police are made to look like incompetents, well, that tells me more about the author than anything. Plus the whole “reform prisoners through hardwork and education” is just so much bullshit. When someone commits premeditated murder, the State needs to kill them for the safety of the rest of the citizens. Now, Platt confuses things even more by making Syrio having committed a crime of passion and Sef being innocent. It was just a very muddled message and that made it even more unpalatableto me than it already was.

Glad to get the end of the story and not a waste of time. I do have another couple of books by Platt that I’m still willing to try. However, if the Rath books are as pathetically “messaged” as this one, I’ll be done. Oh, they also need to ramp up the action. If you’re going to write a Science Fiction series, then having your characters be on spaceships around Earth isn’t enough. The 2nd book was exactly what this series SHOULD have been like. Considering that Platt has failed to truly catch my attention with 2 books, I’m not really hopeful about the Rath ones. Bummer.