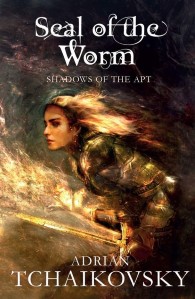 This review is written with a GPL 4.0 license and the rights contained therein shall supersede all TOS by any and all websites in regards to copying and sharing without proper authorization and permissions. Crossposted at WordPress, Blogspot & Librarything by Bookstooge’s Exalted Permission
Title: Seal of the Worm
Series: Shadows of the Apt #10
Author: Adrian Tchaikovsky
Rating: 4.5 of 5 Stars
Genre: Fantasy
Pages: 641
Format: Digital Edition

Che and her compatriots are stuck in the kingdom of the worm. They find out that the worm kinden found an alternate source of power to magic or aptness in the form of a giant centipede that they worship as a god. This god wipes out all thought of magic and aptness from the minds of those in its vicinity. Che tries to raise the populace to revolt but it ends up turning into a run for survival as the Worm begins to devour all of its underground slaves in preparation for breaking forth upon the surface.

Empress Seda figures out a ritual to re-seal the seal of the worm but she needs so much power to do so. To obtain this power, she will use the death of the thousands of Inapt subjects of the Wasp Empire. She begins a progrom using the Slave Corp and once the camps are established, uses the Red Watch to oversea the setting up of machinery to distribute the bee-killer gas in the camps.

General Tynan, now governor of Collegium is torn between his duty to the Empire and plain old common sense. The Empress has him rounding up Inapt instead of fighting the Empire’s enemies. He is eventually driven out of Collegium by Stenwold Maker and his sea-kinden allies. Tynan retrenches in the Wasp capital and prepares to face multiple armies that are all taking advantage of Seda’s preoccupation with the ritual instead of running her Empire.

The Worm begins breaking out all over the world and destroys half of Capitas (wasp capital). When Seda begins her ritual, a lot of the guards at various camps rebel and do not use the bee-killer on the prisoners. Seda reaches out to Che, as her sister in magic and Che drags Seda to the underworld. They duel and Che wins. Totho, rogue artificer and rejected lover of Che, is also in the underground kingdom. He is captured and taken to be fed to the worm but has a belt of grenades. He is able to use the grenades and destroys the giant centipede. This destroys all the worm segments attacking the surface world and fighting grinds to an immediate stop.

General Tynan, now in charge, makes treaties with the various armies and their cities. Stenwold dies in a worm attack. Tisamon is finally set free from Seda’s magical imprisonment as her bodyguard. Che and Thalric make their way to the surface.

I did not race through this book. I would read 20-30 pages here and there and it took me almost 2 weeks to finish this off. Yet at the same time it was not because I wasn’t enjoying it. I immensely enjoyed this re-read. It just felt like a big steak that I simply couldn’t gulp down. I had to take the time to cut it up into small pieces and then chew each of those pieces thoroughly.

My only real complaint was how the worm god died. As I was reading it, it struck me how exactly the same it was as the movie Edge of Tomorrow. Both this book and that movie came out in 2014. They were released within months of each other so I find it hard to believe that one influenced the other. At the same time, the whole idea of a belt of grenades killing the big baddie almost at the end of the story seems too similar to ignore.

I had forgotten that Stenwold dies. I was under the impression that he went back under the sea with his lady friend. It was rather fitting though, since the group that started the book are now all dead. Very “circle of life” and all that.

In that vein, I thought Tchaikovsky did a good job of wrapping up all the various characters and their storylines. Very few have a happy ending but those who live have a decent ending and a chance to go on. After 10 books of almost continual warfare, you really can’t ask for much more than that.

The series overall upon this re-read came out even better. Tchaikovsky can write and each book told a good story while advancing the series narrative. The quality of his writing was top notch and shows that he has mastered the art of writing entertainment. I bought this decalogy when it came out and this re-read has shown me that that was money well spent. I started this re-read back in February of 2017 and am finishing it now, so its been 1 ¾ years of making my way through this. I have enjoyed my time and don’t begrudge it in any way.

I realize that Tchaikovsky isn’t going to be for everyone, but he is one of those authors that I think everyone SHOULD try at least once. Highly recommended.