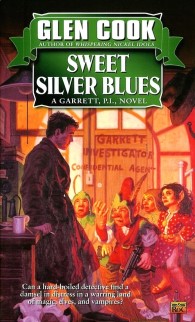 This review is written with a GPL 4.0 license and the rights contained therein shall supersede all TOS by any and all websites in regards to copying and sharing without proper authorization and permissions. Crossposted at WordPress, Blogspot & Librarything by Bookstooge’s Exalted Permission
Title: Sweet Silver Blues
Series: Garrett, P.I.
Author: Glen Cook
Rating: 3.5 of 5 Stars
Genre: Fantasy
Pages: 320
Format: Digital Edition

Garrett, a Private Investigator, is hired by the Patriarch of some cobbler elves to carry out his sons last wishes. It doesn’t hurt that the son and Garrett both served in Cantard and survived their army stint in that region. The father reveals that his son was getting rich in speculating on silver prices, with help from a woman in the Cantard who is probably on the enemies side. This same woman is one that Garrett fell in love with back in the day. So to help out an old dead buddy and maybe see the love of his youth, Garrett agrees to go into the Cantard and get the woman back to TunFaire where she will inherit a small fortune.

Unfortunately, the dead brother has a sister named Rose and Rose wants all that money for herself. She tries to hire Garrett, seduce Garrett, threaten and assault Garrett and eventually she is forced to team up with Garrett. Garrett also hires the help of various people to go on this trip with him.

Turns out the Lady is a vampire now. Garrett and Co kill the Bloodmaster, escape with the Lady and another vampire Garrett’s coworker wants for reasons of his own and make it back to TunFaire. The Lady is welcomed by the cobblers as an unofficial inlaw and given the best treatment to reverse the vampirism. Morly, Garrett’s coworker uses his vampire to destroy the local crimelord who has been making threats against Morly.

Everyone is relatively happy and everybody gets paid. Garrett also hooks up with Rose’s cousin so the detective fulfills the mission AND gets the girl. Not bad.

Nothing brilliant with this book but it was the most fun I’ve had so far this month besides with Shaman King. Light hearted rompy fun.

Cook is obviously riffing on the Hardboiled Noir Detective thing and if I was better versed in that genre I might be able to appreciate this even more. As it is, a hard drinking, hard headed, hard fisted detective living in an Urban Fantasyland works really well. I guess this isn’t strictly Urban Fantasy, as it isn’t our world at all, but it has all the earmarks of a mixed group of humans and supernatural and a city and the goings ons that happen in cities (the stinking, filthy, cowflop places).

Cook still yanks his readers around with making his characters know things that aren’t revealed to us and having “things happen” very suddenly with almost no warning. I know I missed particulars but I just sat back and let the story roll, even if I didn’t perhaps catch all the whys & wherefores. Cook has a style that while not exactly the same, is similar enough so an astute reader can pick up on it from his Black Company books or his Dread Empire series.

I have zero interest in straight up detective fiction. Not mysteries, but Detective Fiction. However, throw in some paranormal stuff and bam, it really works for me. And Garrett is no whiny, crybaby, “poor me, the Council doesn’t like me” miserable sodding jackass like some other character I can think of whose name rhymes with Harry Dresden. I can’t say that if you hate Dresden you’ll like Garrett, but if Dresden made you give up on Urban Fantasy, Garrett might be able to punch you in the head until you admit you really DO like Urban Fantasy now, honest sir!

As long as no pedophile wizard shows up to ruin the series like Cook did with his last Dread Empire book, I suspect I’ll be glad to work my through the 15+ books in this series.