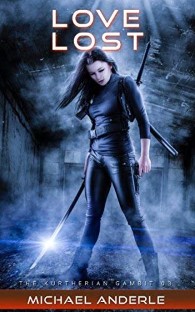 This review is written with a GPL 4.0 license and the rights contained therein shall supersede all TOS by any and all websites in regards to copying and sharing without proper authorization and permissions. Crossposted at WordPress, Blogspot & Librarything by Bookstooge’s Exalted Permission
Title: Love Lost
Series: Kurtherian Gambit #3
Author: Michael Anderle
Rating: 3 of 5 Stars
Genre: SF
Pages: 260
Format: Digital Edition

BA (which abbreviation I shall use from here-on out instead of Bethany Anne), has to start getting a handle on the Empire that Michael has left to her. With hundreds of companies under her control and trillions of dollars at her disposal, BA can coast if she wants to. Obviously, knowing the threat is Out There, coasting isn’t an option. She has to start assembling a larger team that she can trust. A team not only for fighting the Forsaken but a team to start dealing with the spaceship that TOM came in.

So the recruitment begins. The Fighting Force is the easiest, as she starts picking up specialists that have been disillusioned with the military for one reason or another. The kind of people that don’t blink at finding out that vampires are real AND that they are expected to kill such super powerful beings. BA must also recruit information specialists, business specialists, etc, etc, etc. The list is long and she needs to start spreading the responsibility. So she recruits her dad, The General.

The other part of this book was taking the fight to the Forsaken who had attacked her allies here in the United States. Her and her team head to South America and take down one of Michael’s granddaughters. BA gives the children of said granddaughter mercy as long as they don’t hunt humans, thus assuring herself of more potential allies in the future. She also finds out that one of Michael’s First Children was ultimately responsible and BA realizes she has to take care of the Earth’s Forsaken before she can concentrate on any extraterrestrial problems.

This book had a LOT of character introduction going on. BA is setting up her own personal infrastructure and it is going to take a boatload of people. Trying to make 10+ people memorable and a character on their own is a tough task and Anderle doesn’t really accomplish it in this 260page book. I just don’t care enough about “Avengers, Assemble!!” for that kind of detail to keep my interest. It was half the book and while necessary for the overall series plot, felt very much like getting dumped on so Anderle could continue on in later books. Not cool.

The couple of battle scenes were enjoyable. I was hoping for a bit more in the fight scene between BA and the Forsaken she had to take down, but BA is just so overpowered that there wasn’t much of a fight. Maybe once she moves on to Michael’s First Children things will be a bit more even? Or even if BA’s fighting teams take them on, that might make for more interesting reading.

Overall, I did enjoy this but there was just too much setup that felt like setup. Hoping the rest of the books don’t follow this pattern.