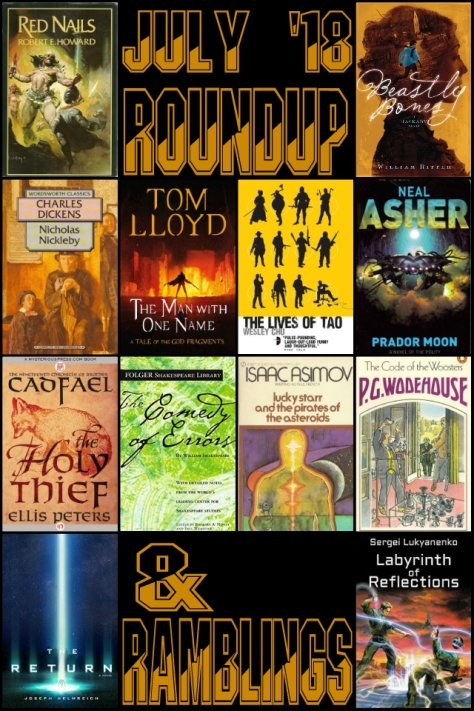 The Man with One Name – 4 Stars

Nada, zilch, zero, none. I’ve got a Superman graphic novel on tap for August though and I’m hoping to get back into a manga series in September. I’m thinking either Kare Kano (His & Her Circumstances) or W Juliet. I own both and have read them both so I’m hoping which ever I read turns out better than that horrible experience with Oh My Goddess! If you have thoughts or opinions on either series, feel free to weigh in. I’m pretty undecided at the moment.

Started the month off with a mid-year Roundup Report. I like all those numbers and not having to wait until the end of the year to roll around in them, like a pig wallowing in mud, was great. Also, since I’m not part of Goodreads or Booklikes, that have “goals” with banners and everything, this helped keep me on track for my unofficial goals.

Started the Thriving on a Good Book series but we’ll see how long it lasts. It is surprisingly hard to write a lot about the books I like, unlike how the words flow like a veritable river when I have had a bad experience.

VERSUS went right along with the Mano A Mano post I did. Testosterone was flowing like blood in a Tarantino film this month. Of course, neither of them was as ridiculous(ly fun to write) as the Saint Bookstooge Gives Answer post where I answered your questions. My goodness, the questions I got were so much fun that I just HAD to give vent to complete silliness.

Survival Saturday. The foods I’ve got are all boil in water stuff, so obviously they’re hot foods. I refuse to make hot stuff like that when it is 90degrees out. Considering that August is usually the hottest month of the year for us, I suspect next month I’ll let this pass as well. I just can’t muster up the courage to face this stuff when I’m dying from the heat.

In the background, I’ve been continuing to update all my semi-recent (2012 and up) reviews and am currently in late 2014. Also in the background, but much bigger for me, is that I’ve started scheduling things 2-3 weeks out now. After having a talk with Professor Dickieson on his blog and getting some good encouragement, I took the last week of June and the first week of July to really pile on the reading and just bank the reviews. That has allowed me to get about 3 weeks ahead in reviews. I’ve heard of people doing this ever since I’ve been blogging but it just never seemed to work for me. But now was the time and I do plan on trying to keep that up with at least my regular reviews and series posts. The really silly stuff is almost always spontaneous though, so I’m not totally going scheduled.

Church has been going well and Pastor Mike has started a series where he is going to synopsize each book of the Bible for a sermon for the whole Bible. He calculated that will take until the end of 2019. That is the kind of planning I LIKE! And considering he was able to have a sermon on Leviticus and Numbers where I came away feeling better, that says something pretty good too.

In keeping with the testosterone that I flung around, this months cover love winner was pretty easy. Conan: Red Nails nailed it. While the cover was cool, the full picture was just awesome. I’ve included that instead of a high res cover.

Mrs B says “He’s ugly”. I remain unaffected because Conan cut off that man’s head with a DAGGER!