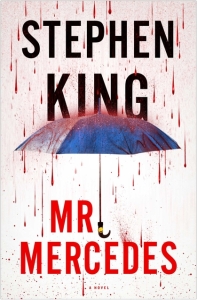 At the 3% mark this past Sunday I had put this aside for a bit.

This week my brother and sisternlaw bought a house and I’ve spent some evenings over there after work helping with painting. Monday was up in the air, so I headed over to a local Barnes&Noble’s and read and took notes and drank a wonderfully delicious chai tea latte. By the 15% mark I had taken 2 pages of notes, so I decided to stop taking them, but kept on reading.

Since I have a beard, I can say that in a “manly voice”. That makes it awesome and not at all girly.

You know, Stephen King is just one messed up fellow. Every year I am blown away by his writing and I wonder to myself “Maybe I’ll read more than one this year”. Then I come across something and I’m like “Oh yeaahhhh, THIS is why I only read one of his a year”.

The protagonist, Bill Hodges, is a great character. A retired cop with nothing to do but watch tv and drink beer and fondle his gun [literally, not the euphemistic way] and wonder if he should blow his brains out.  Then he gets a letter from Mr Mercedes and suddenly, he’s got life again. He’s got a purpose, someone to hunt down.

I was all set for a mystery thriller.

Then we meet Mr Mercedes. Some geek named Brady Hartsfield. There went my idea of “Mr Mercedes” identity being part of the mystery. And my goodness, Brady is where I had my “Oh yeaaahhh” moment. The guy lives with his alcoholic mom and there is definitely incest going on.  It is bad enough that there are messed up people like this in the real world. But it is even worse, in my opinion, that someone else, namely King, can get inside their head and bring them to life on paper. I DO NOT want to know what goes on inside King’s head.

The chapters can be short and rather herky-jerky. I never felt whiplash’y but more thought about it because I was taking notes. Part of the 2+ pages was because some of those chapters were only a couple of paragraphs. It was pretty seamlessly woven together though.

There have also been several references to some of King’s other works. At first I was thinking it was cool, but then I sat back and thought about how’d I feel if it was another author doing this. I’d call another author doing this a self-serving douchebag. So depending on whether I’m feeling grumpy or not, King is cool or a douchebag. Take your pick!

This is shaping up to be a battle of wits between Brady and Hodges. I don’t see it ending happily for anyone and I’m wondering when the supernatural part will come into play. Is Brady going to be possessed? That is my guess.

To end. My goodness, King can write. He’s drawing me in, against my will and while I’m hating him, I’m also loving what he is doing. Now that is an artist’s touch.

You're ten seconds from watching an amazing film...