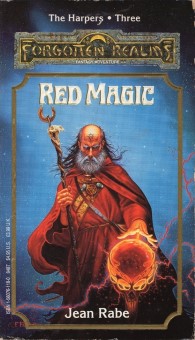 This review is written with a GPL 4.0 license and the rights contained therein shall supersede all TOS by any and all websites in regards to copying and sharing without proper authorization and permissions. Crossposted at WordPress, Blogspot & Librarything by Bookstooge’s Exalted Permission
Title: Red Magic
Series: Forgotten Realms: The Harpers #3
Author: Jean Rabe
Rating: 2 of 5 Stars
Genre: Fantasy
Pages: 320
Format: Digital Scan

Maligor, a Red Wizard of Thay, has plans, big plans. He’s built himself up an army of gnolls and has let it be known that a newly established young red wizard has built his tower on some land that Maligor wants. In secret, Maligor has been building an army of darkenbeasts out of cute wittle woodland animals and is planning on taking over the gold mines for his own personal enrichment.

The city of Aglarond, which is close to Thay, is worried about all the activity going on and they hire some Harpers to investigate. Galvin the druid and his friend Wynter the pacifist minotaur. Aglarond sends it own representative in the form of Brenna Greycloak, a small time politician and enchantress.

In the process of infiltrating Thay, the Harpers are captured by Szass Tam, lich wizard and main character in other future books. Szass Tam has them lead an attack on the mine to stop Maligor. They succeed, skedaddle out of Thay and go their separate ways.

I enjoy stories about the Red Wizards of Thay and about Szass Tam, so I was hoping this book was going to hit the spot, kind of like a good chili dog. Sadly, this chili dog had been left on the counter for a week then overcooked in the microwave for 10minutes.

The interactions between ANY of the characters, whether with other main characters or side characters, was complete cardboard. Galvin and Brenna fall in love for the adventure but then realize their separate life goals aren’t compatible at the end, so they amicably go their separate ways. Wynter the minotaur. THAT should have been awesome. But partway through he gets “magic’d” and acts like a child for some time. And don’t get me started on Maligor and his assistant Asp. I got whiplash from how they interacted. It was completely dictated by the plot instead of the other way around.

Then all the harping (hahahaha) about what a great strategic genius Maligor is because he’s using a public gnoll army to distract everyone while doing his real business with the darkenbeasts? It was bogus. I’m no military genius and even I would have been smarter than Maligor. I would have gathered in some other Red Wizards as “allies” and then betrayed them all like a Good Red Wizard is supposed to. Use their forces for my ends, weaken them and my other enemies and then crush them all in the end, using yet another set of “allies”. Szass Tam did this, Maligor, not so much.

Honestly, this whole book felt like the author hadn’t written any fantasy before, didn’t know how to make use of her characters, hadn’t ever watched one war movie and had no idea how to write a battle scene. “Meh” probably accurately sums up this whole book.

And this is what I got to read last week when I was super busy and doing lots of stuff outside of work as well. Not that I’m bitter or anything.