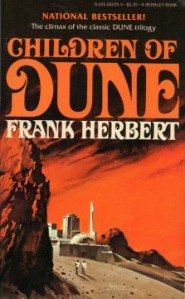 This review is written with a GPL 4.0 license and the rights contained therein shall supersede all TOS by any and all websites in regards to copying and sharing without proper authorization and permissions. Crossposted at WordPress, Blogspot & Librarything by Bookstooge’s Exalted Permission
Title: Children of Dune
Series: Dune Chronicles #3
Author: Frank Herbert
Rating: 4.5 of 5 Stars
Genre: Science Fiction
Pages: 420
Format: Digital Edition

Paul is dead, Alia is ruling as regent and conspirators to topple the Atreides Empire are crawling out of the woodwork.

Paul’s children, Leto and Ghanima, are 10 years old and must begin to take on the trappings of power. They must also avoid the path of Abomination that has overtaken Alia [she’s given in to the inner voices and allowed one of them to take control at times] while fulfilling the vision that Leto has of the human race. A vision that apparently Paul saw and couldn’t bring himself to commit to.

Overall, my thoughts haven’t really changed from my ’12 read. There were places that still bored me to tears. I suspect some of that is because the underpinnings of Dune have an islamic cast to them and so I couldn’t follow all the half-sentence, unfinished, thoughts.

This time around I realized that Leto had seen the Golden Path before he was dosed with spice, so what he was seeing was not a prescient view of the future. So how did he see it? He makes a point of calling it a vision instead of prescience, but where did it come from? Paul’s “visions” were him looking into the future when he was high on spice. Leto couldn’t take the chance of taking spice because the inner lives would overwhelm him during that time. The only thing I can think of is that he was able to see everything his father saw because of his preborn condition.

The other thing I noticed was that most of Herbert’s speculation about viewing the future and such were all predicated on there NOT being an Omniscient Being. Which is interesting because the Dune mythos is built on the whole idea of prophecy and gods, albeit humanity ascendant. Prophecy, or visions of the future, are something that come from God. He is an omniscient, omnipresent Being and hence is not bound by time or space. Herbert’s idea of The Future was where humanity was not constrained by ANY force, within or without. He was writing about humanity without a guiding hand. Which is the antithesis of what I believe as a Christian. And yet the questions he asks are just as intriguing and eye opening as any I could think to ask. And THAT is why I like the Dune Chronicles so much. The questions about humanity.

Completely satisfied about this re-read. While I had re-read it back in ’12, I hadn’t read it before then since at least ’99. This is one series I am very glad to own in hardcover as well as in digital form for my Oasis.