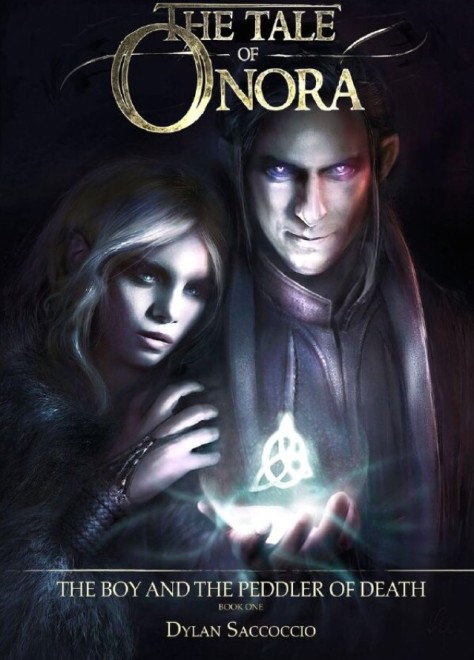 This review is written with a GPL 3.0 license and the rights contained therein shall supersede all TOS by any and all websites in regards to copying and sharing without proper authorization and permissions. Crossposted at Bookstooge.booklikes.blogspot.wordpress.leafmarks.com by express permission of this reviewer.

Title: The Boy and the Peddler of Death

Series: The Tale of Onora

From what I could make out, some great mage had destroyed the Elven Empire of the North a generation ago.

Now there is a boy, who I can’t tell if he’s human or elven or something else who is verbally sparring with his father, who it turns out ‘might’ be the aforementioned mage? I really couldn’t tell.

There is also an Elven woman with a baby, but all that is said is that she is running away from something.

The spoiler following is a sample of what the writing has been like for my entire read so far.

AT THE OPPOSITE END of the Steppe, the aroma of foreign spice and earthiness drifted with the breeze, swirling with the scent of vanilla and clove. A legion of figures swiftly crept out from the valley towards the break of day. Their silhouettes coasted over the arid terrain. They displayed a sexually attractive dexterity. Though the figures were young, they were suitable for midnight deeds by virtue of their maturity.

Beneath the veils of their elegantly shrouded bodies, the Oussaneans had bronze skin. Their fiery hair and feline irises ignited with enthralling sensuality. The Oussaneans habituated that it was not enough to merely conquer a people. They must seduce them.

The Caliphians had a lust for these women, an addiction even. The Oussaneans would hardly succeed at the art of seduction were they not masked by some sort of honor. If one had experienced the dilemma between stealing the life of his soul mate and refusing to do so at the consequence of his own death, he may know the feeling of fighting against these women.

The Oussaneans swept over the terrain. Their glaives and scimitars swayed gracefully like willows in the wind. Every tangible piece of their armor and weapons bore the inscription of the moon, the symbol of the Lunaega Province.

As the legion made their way east, an ominous gallop grew louder and louder until it matched the sound of thunder breaking the sky. A warhorse, blacker than oblivion, more powerful than a herd, tilled the soil as each hoof cut through the earth. The monstrous steed was clad in dark obsidian armor. Its ruby red eyes burned like embers from a diabolical fire. However, it was not the horse that was frightening. It was the rider of that demonic steed and what followed him that struck terror into the hearts of men.

A whole book like that folks. Over-dramatized, bloviated, purple prose that mires you down in its own self-importance.  A whole blasted book.

At 40% I thought I would have had some idea of what was going on. But the characters were simple delivery mechanisms for the author to describe to his heart’s content while at the same time informing us of all sorts of deeply mystical/philosophical musings/rants. And info dumps. In Purple Prose.

It was puerile. What is worse, it thought it was grandiose with all its verbiage and synonyms and utterances beyond the ken of mortals. It was not engaging, it was not interesting, it was not well written. It was the superfluous spew of a wanna-be philosopher who didn’t have enough sense to realize what silliness was coming out of his mouth.

In all fairness, this is probably not any worse than some young silly lord composing Poetry [with the Capital Emphasized!] for his latest infatuation back in the day. But back then only the poor young lady and maybe a close friend or two, had to listen to his stuff. If he tried to read it at the local tavern, I’d be the first to call him drunk and dunk him in a water barrel. Water barrels are known for their powerful restorative effects.

The one positive was the cover and the cover for the sequel. They were both GORGEOUS and I say that as a man. I will probably visit the artist (Virginie Carquin) 0n her own site and check out what else she has to offer.

I Would Rather Be Reading

my life as a bibliophile

THE BOOKS THAT TIME FORGOT.

Reviewing books that time has passed by.